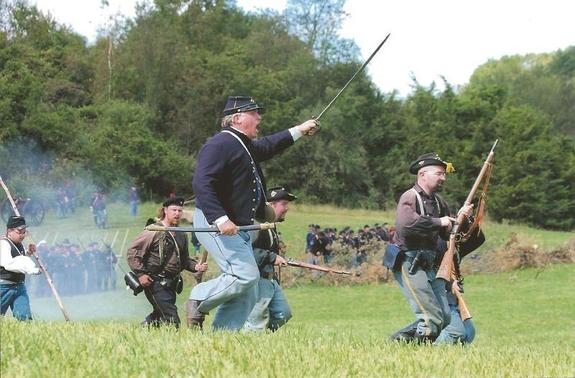 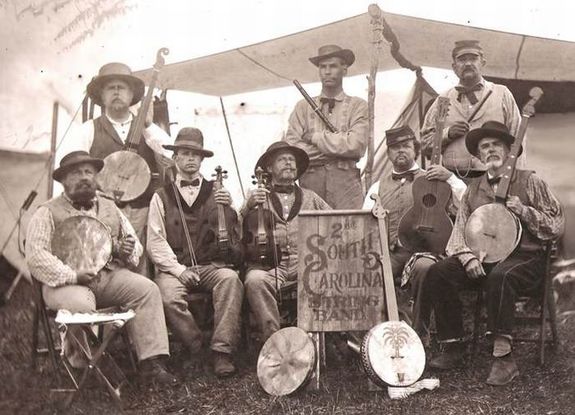 The clash of sabers, musket fire, cannon blasts, and the call of officers---"ready, aim, fire!" -- will resound through the town of Lincoln, RI the weekend of Sept. 13-15, 2013 when several hundred Civil War reenactors, and thousands of spectators, gather at Chase Farm Park for "The Road to Richmond," a Civil War battle and camp reenactment.

"The Road to Richmond" commemorates the Civil War's sesquicentennial by staging the Battles of Mine Run, a campaign which took place in Virginia in the fall of 1863, following the Gettysburg campaign.

The Hearthside House Museum will kick off the weekend with a Candlelight Tour on Friday evening, September 13th at 6:30 and at 7:30 p.m.   A charming stone mansion built in 1810 and privately occupied until 1997, Hearthside House Museum will exhibit an extraordinary collection of rare uniforms, military equipment, and other accroutrements from the period, focusing on the ordinary soldier of the Civil War.  Also on display will be examples of model trains from the period in order to bring attention to the wartime contribution of railroads, a relatively new technology of which Abraham Lincoln was an avid proponent.

Hearthside, which somewhat resembles Mt. Vernon with tall columns across its full length front porch, will be dressed as though it were a southern mansion commandeered by the Union army for use as a command post and residence for officers.  The bedrooms will look as if soldiers were using them, the dining room will be set up for poker, soldier's long johns will hang in the kitchen as if just laundered, and a table will be set with food that soldiers ate, such as fatback and hardtack, a biscuit often infested with weevils but eaten anyway for the extra protein.  The staff actually uses live mealworms to represent weevils.

In addition to a full-scale reenactment of the battles on Saturday and Sunday, visitors will be able to tour the Confederate and Union encampments to get a sense of what a soldier's life was like between battles.  They will see tents authentically appointed for officers, common soldiers, military surgeons and nurses, and clergy.

Other living history activities during the weekend include a Civil War ball with callers to lead dances, period music by one of the nation's premier Civil War era bands--the 2nd South Carolina String Band, and a spectacular night firing of a cannon.  Also, displays of mounted cavalry, a show of 1860s fashions, and talks on Civil War quilts by Pam Weeks, author and director of the New England Quilt Museum, a day in the life of the soldier, and the role of women during the war will take place at scheduled times throughout the weekend.  A small civilian village will be set up for camp followers, such as the sutlers, or vendors, who traveled along with the troops and sold their wares to soldiers.  Food vendors will also be on site, making it possible for families to come and spend the day.  To get kids (and adults) more involved, a Scavenger Hunt for items in the camps and at the historic sites is featured.

Frank J. Williams, former Chief Justice of the Rhode Island Supreme Court and a renowned Abraham Lincoln and Civil War scholar and author, will be presenting a talk on Gettysburg and Rhode Island's contributions to the Civil War.  Williams is founder and chairman of The Lincoln Forum, a national group of scholars who meet to discuss Lincoln's legacy.  He is also Chairman of the Rhode Island Civil War Sesquicentennial Commemoration Commission,

The reenactment also includes an opportunity to visit the nearby historic 1812 Moffett Mill, formerly a water-powered machine shop usually closed to the public, where shoelaces for soldiers were made during the Civil War.  Also open throughout the weekend with the Hannaway Blacksmith Shop (1880), which offers hand-forging demonstrations and provides necessary onsite repairs for the reenactors.  The shop, Mill and Hearthside are all adjacent to the Chase Farm Park and a shuttle bus will provide ongoing transportation to the sites.

Saturday is a day packed with activities from morning till night and families are encouraged to take advantage of all there is to see that day.  Saturday's hours are 9-4:30 p.m. with the battle taking place at 2 p.m.  The dance and night firing take place at 7:30 p.m.  Separate tickets are required for the evening activities and may be purchased by calling Hearthside at 401-726-0597.  On Sunday, the day begins at 8:30 a.m., with a church service in the camp at 9 a.m.  The grounds close at 3 p.m., following the battle at 1:30 p.m. and closing ceremonies.  Hearthside and the Mill will remain open till 5 p.m. on both days. 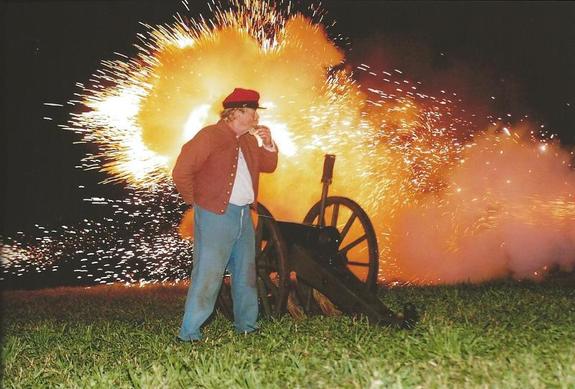 The Civil War Ball and Night Firing is $25/person or $40/couple.  The Candlelight Tour at Hearthside takes place on Friday at 6:30 and at 7:30 with limited space at each time.  To attend either of these evening events, please reserve in advance by contacting Hearthside at 401-726-0597.

From the South in RI:

From the West in RI:

From the East in MA: