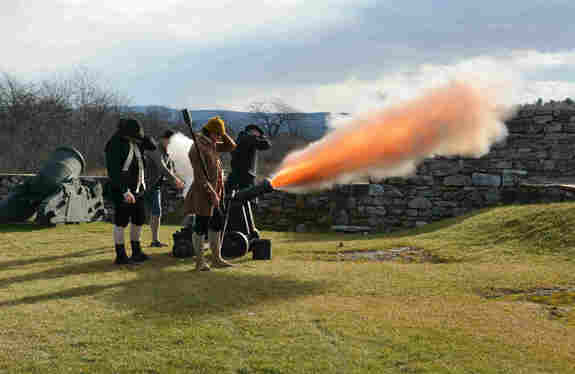 Discover the epic story of Henry Knox's "Noble Train" of artillery at Fort Ticonderoga's upcoming reenactment, Saturday, December 9, from 10 am - 4 pm. The event will feature an exciting program highlighting Henry Knox's arrival to Fort Ticonderoga and recreate the beginning of the incredible feat that ultimately forced the British evacuation from Boston on March 17, 1776.

In this one-day living history event, step into Fort Ticonderoga as if it were December 6, 1775, when Henry Knox rode into these storied walls. Watch as soldiers, days before their enlistment expires, work as carpenters to maintain the fort. Experience the raw power of oxen as these thousand pound animals pull sleds of cannon tubes. Examine the science of gunnery, preserved in Fort Ticonderoga's massive cannon collection. Stand inside the stone walls in the stark beauty of winter on the very spot where Henry Knox began his Noble Train of Artillery. Event tickets are $10.00; free admission is offered to Members of Fort Ticonderoga, Fort Ticonderoga Ambassador Pass Holders, and children age four and under.

Step 240 years into the past at Fort Ticonderoga, as if it were December 6, 1775, during this dramatic living history event. Henry Knox rode into Ticonderoga to dispatch thousands of pounds of artillery to General Washington. This event will highlight how Knox’s wealth of knowledge, coupled with the teamsters and draft animals moved 60 tons of ordnance to Cambridge, Massachusetts. Demonstrations utilizing oxen and horses will dramatically feature the logistical challenge Knox faced with moving the heavy artillery while museum interpretive staff will present programs on the science of gunnery including cannon demonstrations.

“Guests will have the opportunity to discover the inspirational story of Henry Knox, the unassuming Boston book seller, whose physical and mental might would be first tested with the ‘noble train’ of artillery,” said Stuart Lilie, Fort Ticonderoga’s Senior Director of Interpretation. “See man power and oxen power in action as fifty-nine cannons and mortars are carefully selected from Fort Ticonderoga. Witness the struggle for liberty and hardships soldiers faced while serving at Ticonderoga in the winter of 1775-1776. Lend a hand to the carpenters repairing Fort Ticonderoga, and learn about the material needs and productions of the new fledging American army and the resources needed for Knox’s epic journey to Boston.”

“Knox’s story in many ways represents one of the other great revolutions of the 18th century, the transmission of technical and theoretical knowledge through books,” said Matthew Keagle, Curator of Collections. “Knox was able to develop his skills through the world of print that linked together the knowledge of the Western world and beyond.”

The siege of Boston, April 19, 1775 – March 17, 1776 was the opening phase of the American Revolutionary War in which New England militiamen, who later became part of the Continental Army, surrounded the town of Boston, Massachusetts, to prevent movement by the British Army garrisoned within. In November 1775, Washington sent a 25 year-old bookseller-turned-soldier, Henry Knox, to bring heavy artillery that had been captured at Fort Ticonderoga to Boston. Knox knew the challenge before him as he wrote to George Washington on December 5, 1775.

The garrison at Ticonderoga is so weak, the conveyance from the fort to the landing is so difficult, the passage across the lake so precarious, that I am afraid it will be ten days at least before I can get them on this side. When they are here, the conveyance from hence will depend entirely on the sledding; if that is wood, they shall immediately move forward; without sledding, the roads are so much gullied that it will be impossible to move a step.

In a technically complex and demanding operation, Knox began the “Noble Train” in January 1776 at Ticonderoga and carried sixty tons of artillery through the dead of winter to Boston in just forty days. In March 1776, these artillery pieces were used to fortify Dorchester Heights, overlooking Boston and its harbor and threatening the British naval supply lifeline. The British commander William Howe, realizing he could no longer hold the town, chose to evacuate it. He withdrew the British forces, departing on March 17, for Halifax, Nova Scotia thus giving Washington his first great victory of the war.

Fort Ticonderoga is the location of the first Knox Trail marker in the Knox cannon trail that traces the route of the Noble Train. The Fort Ticonderoga Museum owns 2 original artillery pieces that made the epic journey in the winter of 1776.