The Ghosts of Amistad and a Secret Society: Special Screening of New Documentary 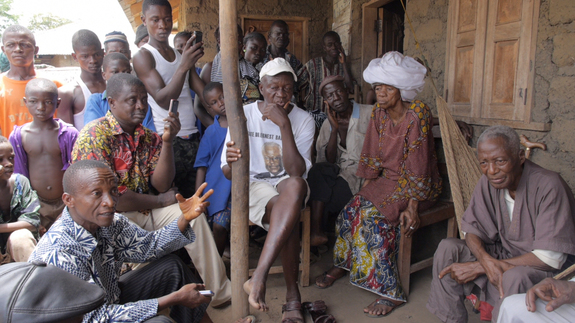 When historian and author Marcus Rediker headed to Africa to make a movie about the Amistad Rebellion, he knew what he was looking for: the Africans’ side of the story. He found it in the most remote part of one of the most impoverished areas in the world, Sierra Leone. Rediker will share the untold tales of the Amistad mutineers–what they did and why–and the secret society that was essential to their revolt– in a special screening of the award-winning film, “Ghosts of Amistad: In the Footsteps of the Rebels.” The event is co-sponsored by The Amistad Committee, Inc., the Gilder-Lehrman Center for the Study of Slavery, Resistance and Abolition, and the New Haven Museum. The free screening will take place at the New Haven Museum on Thursday, September 17, at 6 p.m. ADA access.

Based on Rediker’s book, “The Amistad Rebellion: An Atlantic Odyssey of Slavery and Freedom,” (Penguin, 2012), The “Ghosts of Amistad” chronicles the 2013 journey by Rediker and filmmaker Tony Buba to the villages of the rebels who captured the slave schooner Amistad in 1839, and their search for the long-lost ruins of Lomboko, the slave trading factory where their cruel transatlantic voyage began.

Rediker notes that previously much of the focus of the story of the Amistad Rebellion has been on the sensational trial of the captives in New Haven, but few details from the perspective of both the slaves, and their African captors, are known by the public. The filmmakers relied on village elders, and the stories passed from one generation to another in the West African oral history tradition, to recover a “lost history in the struggle against slavery,” and explore the African origins of the heroes of the Amistad incident.

Rediker first visited the New Haven Museum in 2009 while researching for his book on the Amistad. He notes that some of the most important resources of Amistad materials are in the museum’s Whitney Library, including the papers of John Warner Barber, who met with the rebels while they were held in a New Haven jail and chronicled their stories. He also obtained the images for his book from the museum’s Amistad Gallery and exhibit, “Cinque Lives Here,” which opens with the now famous portrait of Cinque, the leader of the Amistad captives. The 1840 work by New Haven painter Nathaniel Jocelyn is generally understood to be the first and one of the finest portrayals of an African in American art. The Amistad Gallery also includes remarkable Amistad artifacts, including the keys to the New Haven jail where the Amistad captives were held, a letter from John Quincy Adams, and the New Haven law-office sign of defense attorney Roger Sherman Baldwin (1793 – 1863) whose maternal grandfather was Roger Sherman, one of the nation’s founding fathers, author of the “Connecticut Compromise,” and the first mayor of New Haven.

The Amistad Rebellion began in 1839, when a small group of enslaved Africans rose up and seized their ship, the Amistad, and sailed it from the north coast of Cuba to the northern tip of Long Island, where they were captured by the American navy, charged with “piracy and murder,” and jailed in New Haven. American abolitionists flocked to the jail, where they formed an alliance with the Africans. Together they waged a legal defense campaign in New Haven, Hartford and, finally, with former President John Quincy Adams successfully arguing the defendants' case to the U.S. Supreme Court in 1841. The rebels returned home to their native Sierra Leone in triumph in 1842. Their victory broadened — and radicalized — the abolitionist movement as it deepened national conflict over slavery and hastened the coming of the civil war. The courageous action taken by a small group of Africans reverberated throughout the United States and around the world.

Marcus Rediker is Distinguished Professor of Atlantic History at the University of Pittsburgh. He has written or edited nine books, including “Villains of All Nations,” “The Slave Ship,” “The Amistad Rebellion, and, most recently, “Outlaws of the Atlantic.” He is currently writing a biography of the radical abolitionist dwarf, Benjamin Lay. His writings have won numerous awards and been published in 14 languages. Over the years he has been active in a variety of social justice and peace movements, especially the worldwide campaign to abolish the death penalty.

About The Amistad Committee Inc.

Established in 1988, The Amistad Committee, Inc. is a not-for-profit, tax-exempt organization. The original Amistad Committee formed to raise funds for the legal defense and return voyage of the subsequently liberated Africans who were involved in the Amistad Incident of 1839. Today, The Amistad Committee, Inc. is dedicated to the preservation and honoring of African and American history in Connecticut. The preservation of this history and its lessons are imperative and shall not be forgotten, diminished, erased or go unrecognized. "The work to be done is not to be completed in a day or a year; it will require a long time to remove the evils which slavery and habit have so deeply engraved upon the very foundation of everything." Reverend Amos G. Beeman, Middletown, Sept. 6, 1862, letter to the editor of The Weekly Anglo-African newspaper.

About The Gilder Lehrman Center

The Gilder Lehrman Center for the Study of Slavery, Resistance, and Abolition, a part of The Whitney and Betty MacMillan Center for International and Area Studies at Yale, was launched in November 1998 through a generous donation by philanthropists Richard Gilder and Lewis Lehrman and the Gilder Lehrman Institute of American History. Its mission is to advance the study of all aspects of slavery and its destruction across all borders and time. The Center seeks to foster an improved understanding of the role of slavery, slave resistance, abolition, and their legacies in the founding of the modern world by promoting interaction and exchange between scholars, teachers, and public historians through publications, educational outreach, and other programs and events. For further information on events and programming, contact the Center by phone at (203) 432-3339 or e-mail gilder.lehrman.center@yale.edu.

The New Haven Museum, founded in 1862 as the New Haven Colony Historical Society, is located in downtown New Haven at 114 Whitney Avenue. The Museum is currently celebrating 150 years of collecting, preserving and interpreting the history and heritage of Greater New Haven. Through its collections, exhibitions, programs and outreach, the Museum brings 375 years of New Haven history to life. For more information visit www.newhavenmuseum.org or facebook.com/NewHavenMuseum or call 203-562-4183.