The Blue and The Gray in Orange

On August 2nd, 150 years ago, the Town of Orange, Virginia was hopping with the excitement of battle.  Union and Confederate cavalry clattered up and down Main Street in a running fight that resulted in a Union retreat, regroup and counterattack.

This coming August 18th, that excitement returns as the Battle of Orange Courthouse is commemorated by as many as 100 Confederate and Union re-enactors. Cavalry and infantry will parade up the same street and skirmish in front of the same courthouse where the original battle was fought a century and a half prior. On the steps of that historic courthouse and nearby Holladay House, women of the Pallas Athena Ladies Aid Society (PALAS), in period costume, will observe the engagement.  They and the soldiers they support will be wearing commemorative reunion ribbons that will also be available for sale to spectators at the Holladay House.

The parade starts at Main and Short Streets in Orange at 10:30 am, Saturday, August 18th, following a flag dedication ceremony at Rebel Hall.  It will continue west up Main Street, past the 1859 courthouse and onto Peliso Avenue, where it will turn right.  The public is invited to follow the re-enactors to Veterans Park behind Orange Elementary School for a living history.

Flags, weapons, uniforms and cooking techniques are just a few of the demonstrations on tap. Keith Walters will perform live period-appropriate music. The Cooper family of Gordonsville will be serving its famous fried chicken. Volunteers from the Orange County Fair will offer authentic homemade lemonade based on a recipe handed down by Confederate Corps Commander, A.P. Hill’s wife. Cavalry and infantry drill demonstrations are also scheduled. 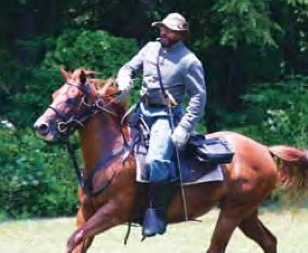 The Saturday parade and living history in Orange is the focal point in a weekend brimming with Civil War 150th Anniversary events in Orange County. Also scheduled is the annual summer Civil War encampment at James Madison’s Montpelier, where re-enactors will portray Sam McGowan’s South Carolinians during the winter of 1863-1864. Camp tours by candlelight Saturday evening, and a lady’s fashion show and battle reenactment are schedule for Sunday, August 19th.

Orange County was a busy place during all four years of the Civil War. That experience is brought to life by a young woman, Fannie Page Hume, who kept a diary that gives us a unique insight into what life was like back then. Her August 2, 1862, entry reads, “another memorable day,” as she goes onto describe the Battle of Orange Courthouse in detail.

This coming August 18th may well prove to be “another memorable day” on Main Street, Orange, 150 years later.

“’The Yankees are coming’…And sure enough they soon came rushing by in immense force, firing in every direction at our pickets. A sharp fight took place in the Village, a Yankee Colonel or Major was killed just before Mr. Robinson’s door (unsubstantiated) and many were wounded on both sides. They took 25 or 30 of our men prisoners- brought many of the wounded in our yard-…it was a sickening sight, blood in every direction.”

For more information about this event or others in Orange County, Virginia, please visit www.visitorangevirginia.com or call (540) 672-1653.