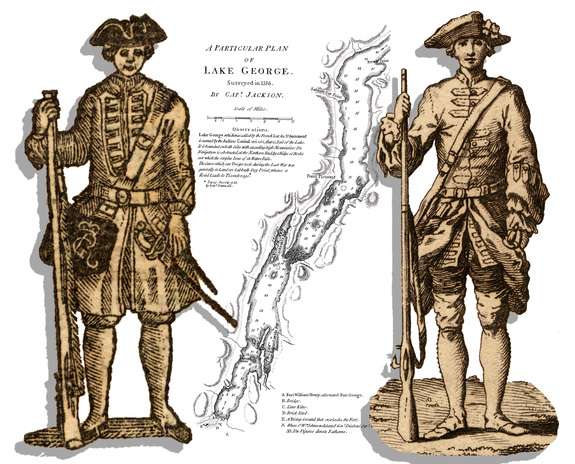 Fort Ticonderoga hosts the Nineteenth Annual War college of the Seven Years' War May 16-18, 2014, in the Deborah Clarke Mars Education Center. Since 1996, the War College has become a top venue for historians on subjects relating to the French & Indian War, drawing speakers and participants from across North America. An enthusiastic audience of nearly 200 people represents all levels of interest, from general lovers of history to scholars. The War College offers a unique, informal setting that promotes interaction and discussion between speakers and attendees. Our speakers include both established and new scholars studying the French & Indian War in North America.

Why did the British Empire in North America Become Territorial in 1763? —Although, before the Seven Years’ War, Britain chiefly valued its North American colonies for reasons of trade, the war began over disputed control of the interior, and the peace terms of 1763 awarded Britain the entire expanse of land to the Mississippi River. Since this was an outcome that the British government had neither sought nor much desired, it needs to be explained. Daniel A. Baugh is Professor Emeritus of Modern British History at Cornell University and author of The Global Seven Years War, 1754-1763: Britain and France in a Great Power Contest. He was awarded the Caird Medal by the National Maritime Museum (Greenwich, London) in 2011for his contributions in research of British naval administration.

What Amherst Left Behind: An Historical and Archaeological Analysis of Lake George’s “Sunken Bateaux of 1758”—In the autumn of 1758, British and provincial forces at Lake George completed a deliberate sinking of 260 bateaux and other types of warships, a tactic to protect the fleet over the winter of 1758-1759 from the French forces. Many of these submerged vessels were raised by British General Jeffery Amherst’s army in 1759 and used that year in the campaign to seize the French forts in the Champlain Valley. Historian Dr. Russell P. Bellico and underwater archaeologist Joseph W. Zarzynski, RPA will present the historical background about this event and provide an archaeological analysis of the spatial distribution and structural condition of the submerged bateaux that Amherst’s soldiers “left behind” in the lake.

“Not in the most regular manner”: The Royal American Regiment at Ticonderoga, 8 July 1758—This presentation demonstrates that service conditions between 1756-58 had not prepared Royal American detachments to operate effectively with other British regiments in conventional engagements. Consequently, their poor performance at Ticonderoga was the result of political interference, suspect leadership, inadequate training, and divided command: all liabilities magnified by the heat of battle. Alexander V. Campbell, a former infantryman in the Canadian Armed Forces, earned his Ph.D. in history from the University of Western Ontario and is the author of The Royal American Regiment: An Atlantic Microcosm, 1755-1772. His current research interest focuses upon the military dimension of the North American fur trade between 1760 and 1821.

Fill the Bowl Again!—In a sutler's booth or an officer's marquee, in camp or on the march, alcoholic beverages were an important part of life for British and colonial troops in North America. This paper looks at popular beverages, drinking customs, and the paraphernalia associated with them during the French and Indian and Revolutionary Wars. Phil Dunning is a material culture researcher in archaeology. As a reenactor, he interprets an 18th century suttler.

"Founding Fashion: The Diversity of Regularity in 18th-century Clothing Collections"—This new exhibition of military garments, accessories, and artworks illustrates the development of military clothing in 18th-century America. Chris Fox is the Curator of Collections at Fort Ticonderoga and curated this new exhibition which explores what military clothing is and how European military fashion and global commerce influenced American martial appearance.

North Carolina’s French & Indian War, 1754-1761—North Carolina was far from the principal seat of war from 1754-1763, but contributed men and money to the war effort in the northern theatre, within its own borders, and later against the Cherokees in the south. How they did so—and their successes and failures during the conflict—will be examined. John R. Maass is a historian at the U.S. Army Center of Military History in Washington, D.C., working on the Army’s commemoration of the Civil War 150th and the War of 1812 Bicentennial. He earned his M.A. at the University of North Carolina at Greensboro and his Ph.D. at Ohio State University.

“Whatever our Fate may be”—Colonel Bouquet’s 1763 Expedition to Fort Pitt and the Battle of Bushy Run—This presentation examines the overall campaign to relieve Fort Pitt during Pontiac’s War. A special emphasis will be placed on the two-day battle fought near Bushy Run Station discussing the strategies and tactics of the combatants. David Miller has been employed with the Pennsylvania Historical and Museum Commission since 1998 and served as the Director of Education at Bushy Run Battlefield for 11 years.

"Blue broad Cloth Lapll’d Coats of various Sizes, Kersey and Frize ditto"—This presentation examines the dress of Massachusetts Provincial soldiers in 1758. Through primary sources, we will examine Governor Thomas Pownall’s impact on supplying the troops and pose the question: "Just what wereMassachusetts soldiers wearing in 1758?" Shaun Pekar is a scholar of 18th-century military material culture and decorative arts and is currently Artificer Shoemaker at Fort Ticonderoga.

How French Were the French? The Demographic and Cultural Diversity of French Forces in the French & Indian War—The military forces that the French Crown marshaled to defend its possessions in North America included not only professional soldiers from France itself, but also Native Americans, residents of New France of European descent, and foreigners from diverse parts of Europe who enlisted in French units. This presentation considers the military experience of troops serving France who were not natives of the French metropole, as well as the cultural and political significance of demographically diverse forces within the context of 18th-century European imperialism.  Christopher Tozzi, who received a Ph.D. in history at Johns Hopkins University in 2013, is preparing a book on foreign and minority soldiers in the French military during the revolutionary era.

Lost and Found: The Discovery of Fort Morris, Shippensburg, PA—For more than 100 years the location of Fort Morris, a Pennsylvania provincial fort dating to 1756-1764, was debated by historians and scholars. Learn how multidisciplinary research, incorporating archaeology, history, and cultural geography, were employed to discover the site. Stephen G. Warfel is a retired Senior Curator of Archaeology at The State Museum of Pennsylvania and has conducted archaeological investigations at Fort Morris, Fort Loudoun, and Fort Augusta—all Pennsylvania French & Indian War period sites.

Fill out the registration form on the next page and mail with  your  credit  card  information  or  check  made payable to Fort Ticonderoga to:

All cancellations must be received by May 1st, 2014. Registration fees will be refunded, less a $25 processing charge.  Refunds  will  be  processed  after  the  week- end. There is a $10 processing charge to transfer registrations  to  another  person.