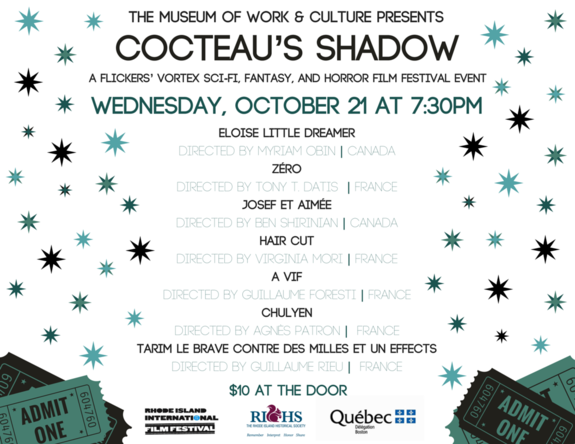 The Museum of Work & Culture will be hosting a Flicker’s Vortex Sci-Fi, Fantasy, & Horror Film Festival event on Wednesday, October 21, at 7:30pm. The Museum will screen a collection of sci-fi and fantasy French language films, including:

Tarim le Brave Contre Des Milles Et Un Effects | Directed by Guillaume Rieu | 2015
Myriam Obin, an animation filmmaker from Montreal, will be in attendance for the screening of her film “Eloise Little Dreamer.”

Admission is $10. Tickets can be purchased at the door or online. This festival event is made possible in part by the Museum’s partnership with the Délégation du Québec, Boston.

MORE INFORMATION ABOUT EACH FILM:

Special presentation of French Speaking sci-fi and fantasy films at Woonsocket's Museum of Work and Culture.

Eloise Little Dreamer | Myriam Obin, Director | 4 min. | Canada, 2015
This creative animation manages to bring voice to a day of celebration in the streets of the city; everyone is wearing masks and making noise. However, a little girl discovers things are not what they appear to be. What is, in reality, a peaceful protest is soon disrupted by an aggressive police action.
Zéro | Tony T. Datis, Director | 10 min. France, 2014.
In the heart of a small suburban park, a young boy is about to reveal his incredible secret to his classmate.
Josef et Aimée | Ben Shirinian, Director| 15 min. | Canada, 2014.
Josef and Aimee were originally from cities in the north of France, but as the Nazi occupation of France drew near, their families sent them into hiding in the south of France.
Hair Cut | Virginia Mori, Director | 8 min. | France, 2014.
A teacher and her pupil linger in an empty classroom. Through their looks and gestures, a strange confrontation begins.
A Vif  | Guillaume Foresti, Director| 23 min. | France, 2014.
Beatrice and Laurent are a couple. Laurent mysteriously lost his senses, little by little. Gradually, he lost the taste and smell, and touch. But more worryingly, it only affects his perception of his wife.
He wonders if the problem really comes from him...
Chulyen | Agnès Patron, Director | 20 min. | France, 2015.
Up there, so close to the pole, Chulyen is bored. Half man, half crow, with his pitiless eyes he cuts the world into pieces. When Chulyen covets a giant's kayak, he comes down from the air to charm and deceive him.
Tarim le brave contre des Milles et Un Effects (Tarim the Brave Versus 1001 Special Effects) | Guillaume Rieu, Director | 19 min. | France, 2015.
As he is going to save a princess imprisoned in the dungeon of an evil sorcerer, Tarim understands that he is the main character of a movie, and decides to fight against the special effect.
----
FAQs

Is my registration/ticket transferrable?
Yes.

Do I have to bring my printed ticket to the event?
Yes, please.

The name on the registration/ticket doesn't match the attendee. Is that okay?
Yes.

NO EXCHANGES OR REFUNDS. ALL SALES ARE FINAL. QUANTITIES ARE LIMITED AND MAY SELL OUT AT ANY TIME.

Admission is $10. Tickets can be purchased at the door or online. This festival event is made possible in part by the Museum’s partnership with the Délégation du Québec, Boston.