In addition to the tour there is Patrons’ Brunch at Wyndfield Farm from 10 am to Noon.  Admission to the brunch is $100 and includes a House Tour ticket, tour of Wyndfield Farm’s historic buildings, a delicious brunch and a complimentary copy of The Stories Houses Tell. 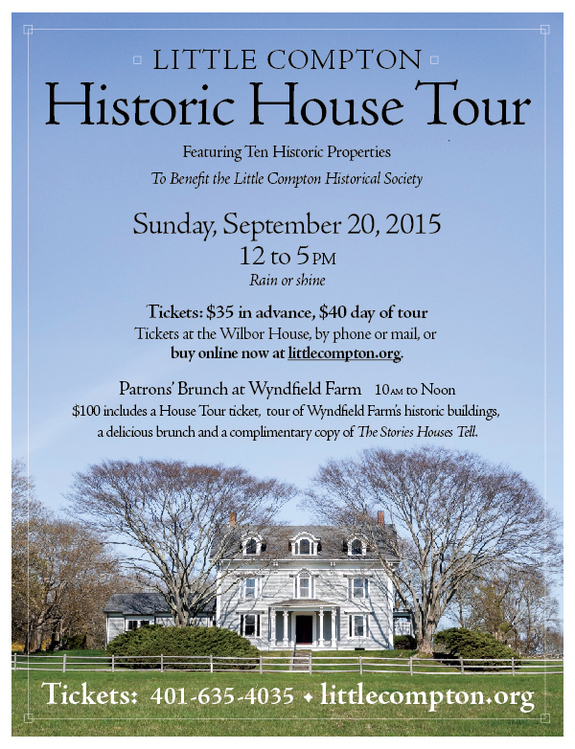 This ten houses on this year's tour

Head House
Long Highway, Goosewing Farm
Built c. 1815 the Head House is a classic New England Cape-Codstyle house at the heart of historic Goosewing Farm. For much of the twentieth century the farm provided access to nearby Goosewing Beach. The property’s current owners, the Acebes Family, have recently completed a remarkably authentic restoration of the historic house with portals allowing visitors a view of its construction techniques. They have also creatively linked the historic Cape to a similarly sized and designed contemporary addition to provide comfortable kitchen and bathroom facilities. The farm’s stone barn has been recently restored providing views of the Atlantic Ocean that extend to Martha’s Vineyard and the Elizabeth Islands. The Head House restoration is one part of an award-winning architectural preservation plan for Goosewing Farm.

Huntoon House
Sakonnet Point Road
Incorporating the mid-eighteenth-century Bailey farm house, the Huntoon House features a number of historic fireplaces and a graceful front staircase. Twentieth-century additions including bay windows and a sun porch provide stunning views of the landscape from every direction. A graceful allée of Linden Trees leads to the house and is complimented by several gardens, one of which includes “The Trap” the site of several weddings. In the nineteenth century the property was known as the James Irving Bailey Farm. Bailey’s poultry was famous in New York. Much of his pastureland is now the “back nine” for the Sakonnet Golf Club.

Lunt House
Fort Church East Reservation
Built in the 1950s using two World War II buildings from the Fort Church Army Reservation, the Lunt House epitomizes Little Compton’s long-standing tradition of repurposing buildings. A barracks and an administration building were combined to form a summer home with spectacular views of Briggs Marsh and Richmond’s Island. The property was once part of the Peleg Bailey Farm. At first simply or even hastily constructed the house was the summer home of well-known publishers Storer Lunt and Margaret McElderry. Today after significant restorations, updates and additions, it is the year-round residence of the Brownell Family.

Marsh House
Warren’s Point Road
Resting on land that was once part of the Tillinghast Bailey Farm, the Marsh house is another example of the creative repurposing of Little Compton’s buildings. Originally built on the nearby beach as a beach club, the club house and two rows of bathhouses were moved back from the beach to their present location in the spring of 1938 to create a summer home for Alexander and Elizabeth Philippi. That well-timed move helped the buildings escape the destruction of the 1938 Hurricane. The house remains in the Philippi family today and is a well-loved family and community gathering spot for parties and holiday celebrations. Its impressive fireplace is made from stones collected on the beach.

Number 4 Schoolhouse
West Main Road
Originally one of Little Compton’s ten District School Houses, the Number 4 School House has been lovingly renovated into an inviting year-round home. The property features a backyard cottage that provides extra room for guests. The Town of Little Compton acquired the property via a Sheriff’s auction and used it as a school house until 1929 when the central school opened on the Commons. It has been a private home ever since. The Number 4 School was used for grades one and two in the 1920s and several
Little Compton residents can still remember attending school clustered around its pot-bellied stove for warmth.

Seabury House
West Main Road
One of Little Compton’s very few Victorian homes, the Albert T. Seabury House was built in the late 1880s on a farm that has been in use since the 1680s. The original farmhouse was moved to the north to make room for the Seabury House and still exists today. The Seabury House retains its original Victorian-style character and now provides a comfortable country home for the current owners. A number of furnishings displayed throughout the house belonged to the original occupants. The property includes several original outbuildings including an impressive stone barn that is now being preserved for use as a family gathering space.

Strobell-Goodrich Cottage
Bailey’s Ledge
Constructed in the early-twentieth century this summer cottage was the retreat of Caroline Lloyd Strobell an author and one of the three female owners of the Communist newspaper The Daily Worker. Caroline loved her quiet Little Compton home built in “The Orchard” of the historic James Irving Bailey Farm. The cottage was soon joined by two other summer homes enjoyed by Caro’s family and friends, including her nephew Lloyd Goodrich the Director of the Whitney Museum in New York City. The Orchard was often visited by relatives Frances and Albert Hackett, both Hollywood screenwriters. The three houses in The Orchard are still owned by a Goodrich family member today.

Seaconnet House
West Main Road
Now a large private home, often called The Palace, Seaconnet House was once an enormous hotel welcoming summer visitors to Little Compton in the 1840s. Henry Richmond deconstructed the hotel in 1863 and created the home much as we see it today. The Army took the property by eminent domain during World War II for use as officer’s quarters on its extensive Fort Church. The Richmonds were able to purchase it back and continue its use as a summer home. Shay Lynch has enjoyed the property as his family’s summer home for over forty years. The house features a dancing staircase, a sunroom addition built to resemble a ship’s overturned hull, and a “HaHa” or sunken garden.

Friends Meeting House
West Main Road
The Friends Meeting House was rebuilt in 1815 after a terrible hurricane damaged its c. 1700 predecessor. As they often did in Little Compton and in other early-America communities, builders reused many of the eighteenth-century materials in the new structure. The building features two separate entrances, one for women and one for men, and has a drop-down wall that creates two separate worship spaces. The separate spaces were a sign of equality and respect between men and women.

Wilbor House Museum
West Main Road
One of the oldest surviving homes in Little Compton, the earliest rooms of the Wilbor House were built c. 1690 by Samuel and Mary Wilbor. Additions followed in 1740 and 1860. The Wilbor House has been home to almost 100 different people since 1690 including indentured servants, school teachers, Portuguese immigrants and twentieth-century tenants. A special exhibition, The Stories Houses Tell, will be on display in the Archival Barn.

Tickets may be purchased in person at the Little Compton Historical Society, by phone (401-635-4035) or by mail or online.

Participants provide their own transportation.  Once they have their ticket in hand they may begin their tour at any home on the tour and go in any order.  Parking signs and parking attendants will help them on their way.