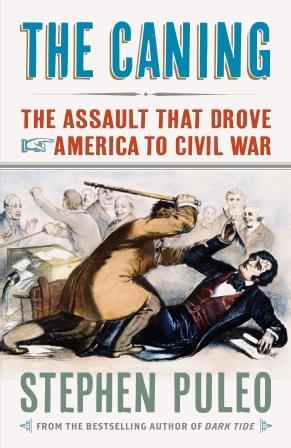 Boston, MA.  The Nichols House Museum, located on historic Beacon Hill, is pleased to present a lecture and book signing by historian Stephen Puleo. The lecture, The Caning: The Assault the Drove America to Civil War will take place on Monday, October 19, 2015 at 5:30 p.m. at Moseley Hall at the Church of the Advent, 30 Brimmer Street, Boston. There will be a book signing with books available for purchase and light refreshments. Admission is $15 for Nichols House Museum members and $20 for non-members. Please call the Nichols House Museum at 617.227.6993 for further information. Tickets are available online at nicholshousemuseum.org

Stephen Puleo will talk about his most recently published book, The Caning: The Assault That Drove America to Civil War. In his presentation, he will explore the challenges of writing the story of this transformative event. Early in the afternoon of May 22, 1856, ardent pro-slavery Congressman Preston S. Brooks of South Carolina strode into the United States Senate Chamber in Washington, D.C., and began beating renowned anti-slavery Senator Charles Sumner with a gold-topped walking cane. While Charles Sumner eventually recovered after a lengthy convalescence, Congressional compromise had suffered a mortal blow. Moderate voices were drowned out completely; extremist views accelerated, became intractable, and locked both sides on a tragic collision course to the Civil War.

Stephen Puleo is an author, historian, university teacher, public speaker, and communications professional. His books include Dark Tide: The Great Boston Molasses Flood of 1919; The Caning: The Assault That Drove America to Civil War; and A City So Grand: The Rise of an American Metropolis, Boston 1850-1900.

A former award-winning newspaper reporter and contributor of feature stories and book reviews to American History magazine and the Boston Globe, Puleo holds a master's degree in history. Steve resides with his wife, Kate, south of Boston. He donates a portion of his book proceeds to the Juvenile Diabetes Research Foundation (JDRF).

The Nichols House is a historic house museum that offers visitors a unique glimpse of late 19th and early 20th century domestic life on Boston’s Beacon Hill. Located at 55 Mount Vernon St., the museum is currently open for tours Tuesday through Saturday, from 11:00 am to 4:00 pm.

Admission is $15 for Nichols House Museum members and $20 for non-members.