Kill Jeff Davis: The Kilpatrick-Dahlgren Raid on Richmond in 1864 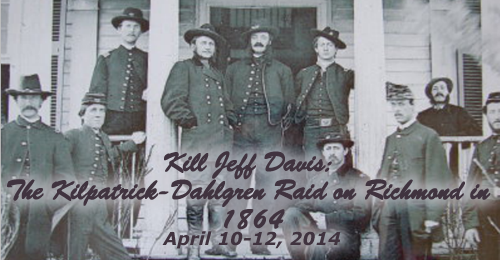 On paper, Union Brig. Gen. Judson Kilpatrick’s plan, approved directly by Lincoln, to release some 13,000 Federal prisoners, “burn the hateful city” of Richmond and capture or kill Confederate President Jefferson Davis, had all the earmarks of success. As one Michigan officer recalled, “The rationale of the raid was a hurried ride, timely arrival, great daring, a surprise, a sudden charge without a moment’s hesitation – success.” Even Confederate cavalry commander Maj. Gen. Wade Hampton felt “the enemy could have taken Richmond” except for some rebel luck. But in execution the Kilpatrick–Dahlgren Raid was a dismal failure; and a major embarrassment to Lincoln when controversial orders were found on the dead body of the expedition’s subordinate commander, the dashing and well-connected Col. Ulric Dahlgren.

On this Sesquicentennial year of the raid, our tour will consider all aspects of the raid’s plan, its execution, the routes taken by Kilpatrick and Dahlgren and the credibility of the infamous “Dahlgren Papers.” We will retrace the raid’s original routes and discuss the decisions, mistakes and happen-stances that affected both the intrepid Federal raiders and the dogged defenders of the Confederate capital. We will focus on the tactical movements of the troops and the decisions made by the commanders on both sides. During most of the tour we will follow the same routes the troopers did in 1864.

On the first day of our tour we will travel to Culpeper County, site of the Army of the Potomac’s 1863-64 winter encampment where we will visit General Kilpatrick’s headquarters, Rose Hill (private property), near Stevensburg. We will see George Armstrong Custer’s headquarters, Clover Hill, and then follow the troopers’ original route to Ely’s Ford on the Rapidan River. We will proceed to Spotsylvania Court House where the column split and Kilpatrick and Dahlgren saw each other for the last time on February 29, 1864. We will then follow Dahlgren’s march across the North Anna River to Frederick’s Hall, past Chantilly plantation, crossing the South Anna into Goochland County. In Goochland we will see the Pvt. James Pleasants Memorial (4th Virginia Cavalry). The young trooper was posthumously awarded the Confederate Medal of Honor. You’ll also see the site of Dover Plantation, the ruins of the Dover Steam Mill destroyed by the raiders, the site of Sabot Hill, Confederate Secretary of War James Seddon’s home, remnants of the James River and Kanawha Canal and the river ford (private property) near Jude’s Ferry that prevented the Yankee cavalry from crossing the river. Lunch will be at the historic Tanglewood Ordinary in Goochland.

After lunch, we will follow Dahlgren’s route along the north bank of the James and visit Tuckahoe Plantation, an early home of Thomas Jefferson, and see the alleged site where Dahlgren’s confused “guide” was hanged at the colonel’s orders. We will follow Dahlgren’s route down the Three Chopt Road to the outskirts of Richmond where the colonel attacked the city’s local defense troops near Green’s farm. We will stop at Roselawn (private property) which was used as a hospital for wounded Union troopers, and then proceed to the site where the Yankee raiders were finally turned back on the Westham Plank Road.

On the tour’s second day, we’ll start at the Beaver Dam Station and follow Kilpatrick’s route to Richmond, cross Blunt’s Bridge to Ashland, and pass by Kilby’s Station. Driving down the Brook Turnpike, we will visit a remnant of the Confederate outer works and then proceed to the intermediate defensive line in Richmond. We will retrace Kilpatrick’s withdrawal over the Meadow Bridges to Atlee’s Station where Hampton’s surprise night attack occurred. We will follow the Federal cavalry’s retreat to Old Church, and Tunstall’s Station, and see where Captain Mitchell’s column broke thru Bradley Johnson’s Maryland cavalry to reunite with Kilpatrick. At this point we will pick up Dahlgren’s route as he attempted to retreat down the Peninsula. We will cross the Mattaponi River at Aylett’s Ferry, and then proceed through King and Queen County where Dahlgren’s tiny band fought a continuous rear guard action as they retreated. We will follow the same roads as the raiders did in 1864, passing Bruington Church, Butler’s Tavern site, and Garnett’s Creek to “Dahlgren’s Corner,” the ambush site. We will conclude our tour at the Courthouse Tavern in King and Queen Court House, one of the few structures not destroyed when Kilpatrick burned the village on March 10, 1864 as revenge for Dahlgren’s death.

Our Tour Leader: Dr. Bruce M. Venter is president of America’s History, LLC and an experienced tour leader. He has lectured at cavalry symposia and written articles for Civil War, Blue & Gray and the Washington Times. His Blue & Gray article on “The Kilpatrick-Dahlgren Raid on Richmond, February 28-March 4, 1864″ is regarded as the most detailed tactical account of the raid presented to date. His book, Kill Jeff Davis: The Kilpatrick-Dahlgren Raid on Richmond in 1864 will soon be published by the University of Oklahoma Press.

What’s included: motor coach transportation, two lunches, beverage and snack breaks, a map and materials package, all admissions and gratuities, and the services of an experienced tour leader. Our hotel will provide a complimentary breakfast each day. Tour participants are responsible for transportation to the headquarters hotel, and securing a room reservation, if necessary. Dinner is on your own. Tour goes out rain or shine. Please see our policy page for information about cancellations.

Added Benefit: America’s History will provide you with pick up and drop off at Richmond International Airport, if you are flying in for this tour.

Hotel: We have arranged with the headquarters hotel for a group rate of $84.00 per night plus tax (double or single occupancy.) Please call the Marriott Fairfield Inn & Suites Richmond Northwest, 9937 Maryland Drive, Richmond (Glen Allen), Virginia 23233 at 804-545-4200 and ask for the America’s History group rate. This rate will be guaranteed until March 10, so please make your reservations soon.