Pay tribute to the Scotmen who settled the western reaches of York by raising a glass at our Whisky Tasting in Jefferds Tavern! Join our Whisky connoisseur to learn about the differences in a variety of single malt Scotch whiskies and enjoy accompaniments in the Tavern decorated for the holidays. 5:30-7 pm. Reservations are required. Please call (207) 363-4974.

Jefferds Tavern, a Colonial era hostelry, served as the Visitor and Education Center for many years. With the new facility, the historic Jefferds Tavern has now been returned to use as a historic museum building.

The Tavern was restored in the 1940s to an idealized version of a true colonial tavern, using paneling and other architectural components from other antique buildings to set the stage for colonial interpretation. 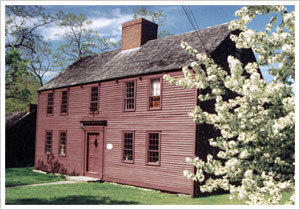 Built in 1750 in Wells, Maine, just north of York, Jefferds Tavern was originally located on the King's Highway, a stage and mail route between Portsmouth and Portland. It was first owned and operated by a locally prominent innkeeper named Captain Samuel Jefferds. The tavern descended in his family until the dilapidated building was acquired by architect and historian William E. Barry in 1925. After years of training in Boston, Barry returned to his native Kennebunk to live and work as an architect and at his own expense had the tavern completely restored. Influenced by 1920s colonial revival literature and publications, Barry's primary model for the project was the Wayside Inn in Sudbury, Massachusetts. That famous building was made familiar by Henry Wadsworth Longfellow's collection of poems, "Tales of a Wayside Inn." Longfellow's poetry is known to have effected Barry as well as many other readers with its evocative nostalgia for a romanticized rural domestic life.

After Barry's death in 1932 the building suffered vandalism. Miss Elizabeth Perkins of York discovered the windowless shell of the Tavern and acquired it in 1939. Intent on renewing interest in its historical significance, Miss Perkins had Jefferds Tavern dismantled and moved to York under the direction of architect Howard Peck. It took a month to complete this process and the disassembled building was stored in Peck's barn for two years until it was reconstructed in 1941 on the corner of Raydon Road and York Street on land which Miss Perkins purchased from Peck.

Miss Elizabeth Perkins was a founder and major benefactress of The Society for the Preservation of Historic Landmarks in York County, which merged with two other local historical organizations in 1984 to form the Old York Historical Society. She saw the building's significance in the Colonial period and its potential educational value to the community as attributes to warrant rescue from its probable destruction. During her fundraising efforts to have the building moved and restored she wrote and published many articles explaining the role of the tavern in colonial life and describing objects such as the fireplace crane, cage bar, and hearths in the building. Her efforts were successful; by 1942 the reconstructed building was already attracting tourists to York.

The Tavern today shows a melding of original colonial era elements such as Georgian style doors and paneling with the more romanticized notions of the colonial revival period of the early twentieth century in exposed beam framework and refinished plank floors. The bar cage in the tap room is a copy from an original feature at the Wayside Inn in Massachusetts. The cooking fireplace and beehive brick oven in the "keeping room" - still used for cooking demonstrations - evokes the domestic toil of colonial days. Upstairs, wall murals in the style of 19th century itinerant artist Rufus Porter incorporate historic York buildings in its rolling landscapes.

In 1959, the building was moved intact to its present location, originally "glebe land" belonging to the First Parish Church. Jefferds Tavern was placed next to the Old Schoolhouse that Miss Perkins had relocated to the site in 1936. The relocation of the Tavern complimented what Howard Peck called the "Atmosphere of Old York" which had been cultivated since the turn of the century.