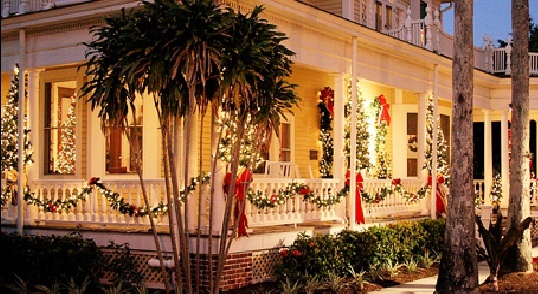 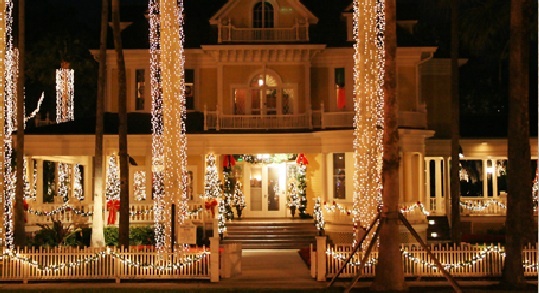 This beautiful, riverside home sits on 2.45 acres overlooking the Caloosahatchee River in historic downtown Fort Myers. John T. Murphy, a cattleman from Montana, visited Fort Myers in 1899 for business purposes and liked the area so much, he stayed for the winter. Interested in permanent winter residence, Murphy purchased 450’ of waterfront property for $3,500.

The 2 1/2 story 6,000 square foot home, completed in 1901, is a fine example of turn-of-the-century Georgian Colonial Revival architecture. The architect was George Barber of Knoxville, Tennessee; a well-known kit and catalogue house designer. John Murphy was able to choose such embellishments as Palladian, bay and stained glass windows, dentils, brackets, balustrades, a widow’s walk and a sweeping veranda. It became one of the jewels of Millionaire’s Row on First Street.

The house includes eleven-foot ceilings, pine floors, burly pine wainscoting, quarter-sawn oak fireplaces and a winding grand staircase. The main floor has four main receiving rooms with fireplaces: a parlor, music room, dining room, and library. Unusual for its time, the home included indoor plumbing and electricity. Electric bells throughout and an early version of an intercom in the kitchen were used to summon servants. Some select pieces from the Burroughs family including the dining room set, kitchen table, sleigh beds and art work remain in the house.

The grounds contain a free-standing fountain, a grotto (the first one built in Fort Myers) fed by an artesian well, a “secret” garden with reflecting pool, gazebo, palm alley and tennis/dancing courts. The garden features many varieties of palm trees, elephant ears, century-old oaks, ficus, bougainvillea, bird of paradise and pothos. The site also contains a Caretaker’s/Carriage House and utility shed that were built to echo the home’s architecture.

Nelson and Adeline Burroughs purchased the home in 1918. The Burroughs family, from Cherokee, Iowa and Chicago, Illinois became popular winter residents as well known for their business acumen as their spectacular parties in the moonlit tropical gardens. Mr. and Mrs. Burroughs traveled the world, were married over sixty years and raised four children. They had two daughters, Jettie and Mona, and two sons, Roy and Raynor, who died tragically. Jettie was the responsible older sister who handled the family business affairs. Mona married three times and was described as fun-loving and a vagabond. On tours we tell their stories gleaned from oral histories, first-hand accounts, journals, newspaper articles, scrapbooks, photos and items of material culture.

When Mona Burroughs Fischer died in 1978, she willed her home to the City stipulating that it be used as a park, library, or museum. The home was listed on the National Register of Historic Places in 1984 and as a local historic landmark in 1994. The Burroughs Home is under the management of the Uncommon Friends Foundation which is committed to Character Education, Business Ethics and Historic Preservation. The Foundation also safeguards the James Newton Archive and the remaining Burroughs Family artifacts. The home and gardens are available for historical tours, teas, special events, weddings, receptions, and Holiday House.