Every October, Lincoln’s Hearthside House goes into mourning. It’s all part of the annual exhibition, “Gone But Not Forgotten: Victorian Mourning & Funeral Customs,” which opens on Saturday, October 17th. In this exhibit, each room in the 10-room museum is transformed to recreate the scene of a typical wake and funeral of the 19th century. The solemn occasion is a depiction of a household in mourning, in this case, for the death of Hearthside owner Simon E. Thornton, who died there in 1873.

“If you ever wondered why we wear black for funerals, the displays and guided tours in this exhibit explain how these mourning customs and rituals came about, all from the influence of Queen Victoria’s loss of her husband in 1861,” says Kathy Hartley, president of Friends of Hearthside, sponsors of the event. “Queen Victoria set in motion a strict set of rules that upper and middle-class families followed, among those being the clothing that was worn through several stages of mourning.”

As somber funeral music plays in the background, volunteer docents dressed in mourning attire will lead visitors on a fascinating tour through the house as they hear about early funerary customs and view the exhibits in each room. Homes were also decorated in times of mourning, with black coverings draped on mirrors, windows, and even outdoors. A mourning wreath on the front door was a solemn symbol that the household was mourning the loss of a loved one. Funeral gatherings typically took place in the residence of the deceased where the casket was displayed and mourner gathered until the trip to the cemetery.

Featured in the exhibit is an antique wicker coffin, used to transport bodies to the grave, and the funeral book in which Simon E. Thornton’s death was recorded by the undertaker. A portable embalming table and the undertaker’s embalming equipment is set up in the same bedroom where Simon Thornton took his last breath. 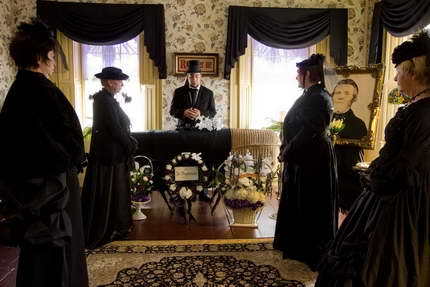 In the dining room, visitors are offered a memento of a cookie, wrapped and sealed with black sealing wax, a common gesture by the family at a wake. The house tour, which includes all 3 floors of the 1810 home, concludes in the drawing room, or formal parlor, where the coffin containing “the deceased” is displayed, giving mourners a chance to pay their respects. The strong fragrance of lilies and other flowers fill the room, and a portrait of Thornton, taken near the time of his death, stands near the coffin.

In addition to Victorian funerary memorabilia, objects on exhibit include Victorian mourning clothing, jewelry made from the hair of the deceased, black-bordered stationery, and post-mortem photographs in which family members pose with dead loved ones propped up in a life-like positions.

Candlelight tours on Saturday, October 17 and 24th are held at 4:00, 5:00 and 6:00 p.m. Advance reservation is recommended due to limited space. Cost is $10 general admission. Tours on Sunday afternoon Oct. 18 and 25th are held every half hour between 1-4 p.m. with the last admission at 3:00. Admission is $8 for afternoon tours. Call Hearthside at (401) 726-0597 or email kathy.hartley@hearthsidehouse.org for reservations.

Hearthside is located at 677 Great Road (Rt. 123), Lincoln, RI. Convenient to Rt. 146 and Rt. 295, 10 min. north of Providence. Parking in lot across from Hearthside. Handicap parking behind house. For detailed directions, www.hearthsidehouse.org