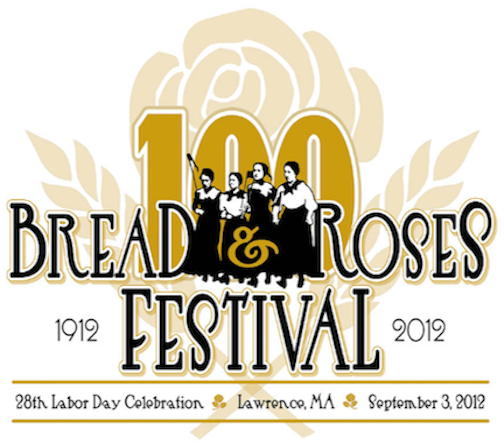 The Bread and Roses Heritage Festival is a celebration of the ethnic diversity and labor history of Lawrence, Ma. This annual festival is celebrated on Labor Day in order to honor the most significant event in Lawrence history: the 1912 Bread and Roses Strike.

We memorialize the event with a variety of music and dance, poetry and drama, ethnic food, historical demonstrations, and walking and trolley tours, all on or starting from Lawrence's Common. We also host organizations continuing the struggle for social justice today.

A Besere Velt , "As We Come Marching..." their new Bread & Roses Strike Show

Read more about it in the Boston Globe:http://http://www.bostonglobe.com/lifestyle/travel/2012/07/28/lawrence-commemorates-centennial-bread-and-roses-strike/i0TaAGJLu1J0TuSoYMAEgP/story.html

Here's the background on the Bread & Roses strike 100 years ago: 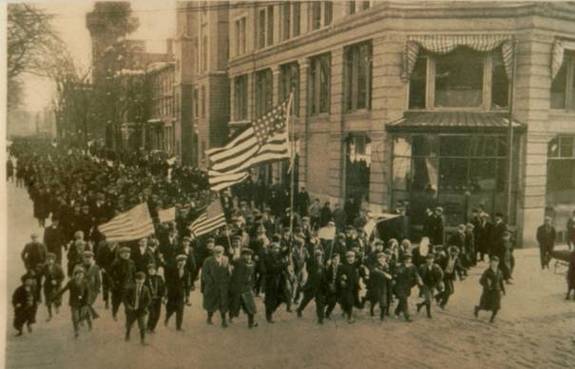 Our festival is named after one of the landmark events in American labor history, the great Lawrence textile strike of 1912, which has come to be known as the Bread and Roses Strike. In 1912, a new state law went into effect reducing the work week of women and children from 56 to 54 hours. But because so many women and children worked in the mills, men’s hours were also reduced. When the first paychecks of the year revealed a cut in pay, thousands of workers, already barely surviving on an average pay of $8.76 a week, walked out of the mills, and the Great Strike had begun.

For nine weeks in a bitterly cold winter, over 20,000 workers, mostly new immigrants, dared to challenge the mill owners and other city authorities. Thousands of picketers, many of them women, faced state militia armed with guns and clubs. But the strikers were generally peaceful. The two fatalities were both of strikers. A cache of dynamite, first attributed to the strikers, turned out to be planted by mill owners and their friends in a clumsy plot to discredit the strikers and their radical union, the Industrial Workers of the World. Observers were impressed by the strikers’ inter-ethnic cooperation, their soup kitchens, the important role of women, and their reliance on song to bolster their spirits and express their beliefs. Some women strikers reportedly carried banners proclaiming “We want bread, and roses too”, symbolizing their fight both for subsistence and for dignity. Although the use of the phrase here has never been documented, the “Bread and Roses Strike”, symbolizing the fight for subsistence and dignity, has stuck as the name for this seminal event.

The tide turned against the mills when police, attempting to prevent strikers from sending their children to the care of sympathetic families in other cities, caused a melee at the train station which received international press attention. At a subsequent Congressional hearing, the testimony of Carmela Teoli, a young millworker who had suffered a terrible injury to her scalp, shocked the nation. Soon the mills came to the bargaining table, and the strikers won most of their demands. The Bread & Roses Strike drew attention to the problems of child labor, workplace safety, and the unequal distribution of the profits of industry. It was an important step in organized labor’s long struggle to gain benefits that many of us take for granted today.As the nation again faces an era of increasing inequalities of wealth, we can take inspiration from the workers of Lawrence, and the “Bread and Roses” Strike.

To learn more about the strike during the Festival, see the video “Collective Voices” at the Friends of Lawrence Heritage State Park tent, or take a free trolley or walking tour. You can also tour the exhibits at the Heritage Park any day from 9-4. Admission is free. The Lawrence History Center, our historical society, and the Lawrence Public Library can also help you learn more about the strike. Email: lawrence.heritage@state.ma.us or see http://www.mass.gov/dem/parks/lwhp.htm

From Route 495 North or South: Take exit 45 (Marston Street). From Marston Street take first left onto Canal Street. Go straight through one set of traffic lights then take second right onto Jackson Street. Continue on Jackson through two sets of lights and the Common will be on your left. There is street parking along the Common, and on adjacent streets. Festival performers and vendors may also park in the Lawrence Senior Center lot, at 155 Haverhill Street. FYI Starting from Route 495 there are brown and blue signs directing visitors to Lawrence Heritage State Park Visitor Center, which is on the corner of Canal and Jackson Streets, just two blocks from the Common.

By Train: Lawrence is on the MBTA commuter rail, Haverhill/Reading line, from North Station in Boston. See www.mbta.com for schedule and rates. From Lawrence train station, walk (less than one mile) to Festival: North across Central Bridge, right on Canal Street, one block, left on Appleton, 3 short blocks to Common and Festival.