Bicentennial of the War of 1812 Boston

The US Navy in partnership with OpSail and the US Coast Guard has planned several commemorative War of 1812 events in Boston, the home port of victorious 1812 US Navy warship, USS Constitution. It was during this war that our young nation fought to preserve its independence and when USS Constitution earned her famous nickname, “Old Ironsides.” To recognize two hundred years of peace between the United States, Canada, and the United Kingdom, international naval vessels and tall ships have been invited to Boston during Harborfest (June 28 – July 4, 2012).  In anticipation of this summer’s War of 1812 commemorations the Charlestown Navy Yard partners have several upcoming programs and activities for the public.  Join us to explore all that the Navy Yard has to offer this summer!

JULY 1 – USCGC Eagle open for public tours (10 am – 5 pm).  USCG Search and Rescue Demonstration at 1:30 pm in the waters between the Navy Yard and Puopolo Park.  A USCG helicopter and small boat perform a mock rescue.

United States Coast Guard Presentation, "Cementing the Core Missions: Revenue Cutter Operations in the War of 1812" offered at  11 am and 3 pm in the Charlestown Navy Yard Visitor Center Theater (Building 5)

"History on Wheels," NPS rangers manning pushcarts throughout the Yard help visitors learn how to repair a ship, discover children’s games and toys, and explore the age of sail and steam.

"Stories with Rangers," Park Service Rangers read share stories and provide hands-on activities for families to explore the many activities of a working Navy Yard.

Visitors will find fun character cut outs throughout the yard, each with introductions and QR codes to learn more. Many new outdoor exhibition panels will illuminate "Life and Work in the Navy Yard in 1812."

A series of colorful, interpretive banners will guide visitors across the Charles River bridge and into the Charlestown Navy Yard to usher in the commemoration of the Bicentennial of the War of 1812.

See map and schedule below.  See the comments below this event listing for links to pictures and additional maps and handouts. 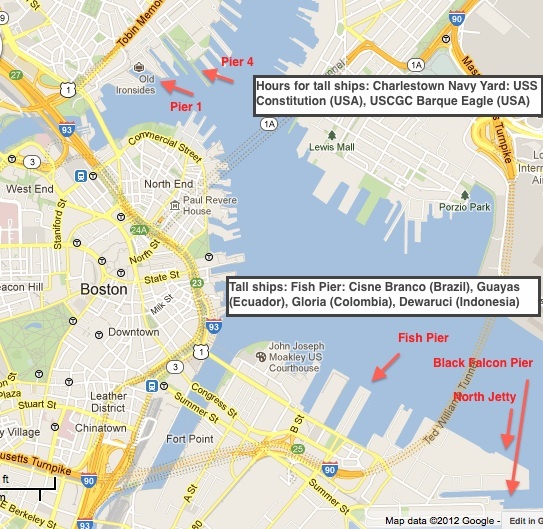 Free public tours of ships today.  Times for and other activities for tall ships:

Lynx - Newport Beach, CA
Designed to interpret, the original served effectively as a blockade-runner and offensive weapon of war, she was among the first ships to defend American freedom.

Spirit of Massachusetts - Boston, MA
Owned by the Ocean Classroom Foundation, this schooner sails on programs of education teaching youth groups during semesters at sea adventures.

Roseway - St. Croix, USVI
Built in 1925 in Essex, MA as a private fishing yacht, she was later purchased in 1941 and was honored for her exemplary service during WorldWar II.

Gazela - Philadelphia, PA
Owned by the Philadelphia Ship Preservation Guild, the Gazela, in addition to other boats, serve as a workshop for the Guild.

Formidable - Rockport, ME
The Formidable is a New England icon and has given tours of the Historic Cape Ann with its crew dressed in pirate gear.

Appledore V - Bay City, MI
Sailed by a professional captain and mate, with a crew of trainees, this ship completes its voyages as part of teaching tool to adults and youth.

Note: Some or all ships may not be able to be boarded in a wheelchair.

Note: Address shown above is for the Charlestown Navy Yard.