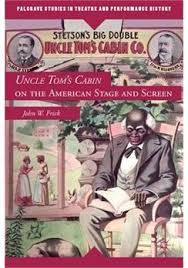 The Harriet Beecher Stowe Center presents a free author talk and book signing with John W. Frick, Ph.D. on Wednesday, April 17 from 7-8:30 p.m. at the Stowe Center.  Frick, professor emeritus of Theater History at University of Virginia, is author of Uncle Tom’s Cabin on the American Stage and Screen (Palgrave Macmillan 2012).

When Harriet Beecher Stowe’s Uncle Tom’s Cabin was published in 1852, it quickly became a bestseller outpaced only by the Bible.  Although widely read, more Americans experienced Uncle Tom’s Cabin on the stage in adaptations that strayed from Stowe’s novel.  Immediately after the book’s publication, plays loosely based on the novel, so-called “Tom Shows,” were widely produced in theaters and traveling shows across the country.

In his new book, Uncle Tom’s Cabin on the American Stage and Screen, theater historian and retired drama professor John Frick chronicles how Stowe’s novel was adapted to theater and film – and details how, by the beginning of the 20th century, more than 400 separate companies traveled and performed some theatrical version of the story.

The productions launched the careers of a number of actors. The list includes luminaries in American theater – David Belasco, Lotta Crabtree, Otis Skinner and Joseph Jefferson, who was famous for his portrayal of Rip Van Winkle.  The first full-length movie of Uncle Tom’s Cabin was a 1903 silent production by film pioneer Edwin S. Porter, a director with Thomas A. Edison’s film company. In 1927, Universal Studios released an epic version, shot on multiple locations at a cost of more than $2 million.  In modern times, a 1987 television adaptation of Uncle Tom’s Cabin starred Avery Brooks, Phylicia Rashad and Samuel L. Jackson.

Frick, professor emeritus of Theatre History at University of Virginia, is author of Theatre, Culture and Temperance Reform in Nineteenth-Century America and New York's First Theatrical Center: The Rialto at Union Square as well as co-editor of The Directory of Historic American Theatres and Theatrical Directors: A Biographical Dictionary. He is a past editor of Theatre Symposium, a former Stanley J. Kahrl Fellow at Harvard University, past president of the American Theatre and Drama Society, and the 2010 recipient of the Betty Jean Jones Award for Outstanding Teacher of American Theatre and Drama.