George Kingston will speak on his new book, "James Madison Hood: Lincoln's Consul to the Court of Siam", at the East Longmeadow, MA Public Library at 1 PM on March 2, 2013.

Books will be available for sale and will be signed on request. 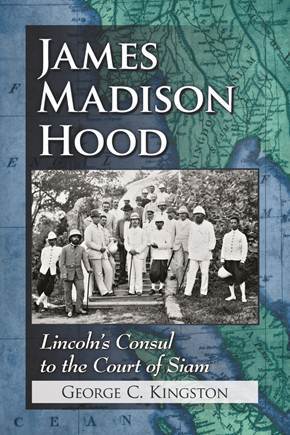 The book is a historical biography of a 19th Century merchant master, ship builder, and politician who served as U.S. Consul at Bangkok from 1865 to 1867, during the time when the events in "Anna and the King of Siam" were taking place.

Captain James Madison Hood was the U.S. Consul at Bangkok, Siam from 1865 to 1868. This was the period when Anna Leonowens was serving as personal secretary and governess of the royal children to King Mongkut, while the King was struggling to maintain the independence of the country from France, which had recently conquered Cochin China and was attempting to extend its influence over Cambodia. Captain Hood became embroiled in the Siamese-French dispute when he attempted to rein in the attacks of the American missionary and newspaper publisher, Dr. Dan Beach Bradley on the French Consul, Gabriel Aubaret.

Captain Hood was born in Massachusetts in 1815, and became a merchant ship master, clipper ship builder, industrialist, state legislator in both Massachusetts and Illinois, and political ally of Abraham Lincoln, before becoming Consul. Each of these roles is explored in some depth, including details about the ships he built.

Hood was a founding member of the Republican Party and something of a rogue with a taste for young women and a fast buck. The years leading up to his consulship shaped him into the man who befriended the King, yet who managed to alienate key members of the American community in Bangkok.

The book contains detailed discussions of the two critical trials he conducted in the Consular Court, including the internationally significant Aubaret vs. Bradley. It also discusses his somewhat shady financial engineering as Consul and the personal attacks that were launched against him.

Hood's life illustrates what it was like to move through the political and economic turmoil of the mid-nineteenth century.

More information on the book can be found at http://www.jamesmadisonhood.com/