When the Pilgrims sat down to Thanksgiving dinner in 1621, they must have been grateful indeed. Beyond the turkey, and probably some hefty lobsters, the venison that was served was undoubtedly a treat. Back in England, deer were property of the King and a forbidden delicacy, though some Pilgrims may have eaten “humble pie” made from the cast-off deer innards known as “humbles.” Thankfully, there will be no humble pie at the Webb-Deane-Stevens (WDS) Museum’s Colonial Thanksgiving Dinner on Sunday, November 15. Yet, remarkably, Priscilla Alden—a prominent guest at the first Thanksgiving—will travel nearly four centuries to be there, in her finest dress. Alden will mingle with guests at the opening reception, at noon, and give an engaging presentation during the authentic, colonial feast at 1 p.m.

Alden will be portrayed by Kathy Rudder, an energetic and entertaining colonial-foodways artisan, and manager of historical crafts, trades, and domestic skills at Plimoth Plantation, in Plymouth, Massachusetts. Rudder’s expertise encompasses the intersection of food in culture, traditions, and history. She will introduce each of the authentic dishes as they are brought out to the rustic, family-style tables, explaining what guests are eating and why. As visitors enjoy their 18th-century desserts, Rudder will share her wit, wisdom, and vast knowledge of all things Thanksgiving, slipping in and out of character, as Priscilla Alden, as needed. She’ll also share some surprising details on the first Thanksgiving, which she describes as a “three-day blow-out” that likely included dancing, singing, military exercises and games. She’ll bring some fascinating extras along, too, including “real” corn bread, made at Plimoth Plantation from an age-old recipe using the sort of dried, colorful Indian corn now considered strictly ornamental. This same corn, Rudder points out, was a staple of the Plymouth Pilgrim diet. 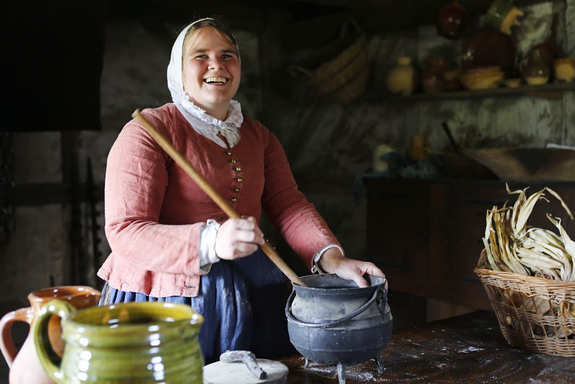 If prompted, Rudder may even enlighten WDS guests on 17th-century table manners, sharing tidbits such as: “Thy knife be sharpe to cut fayre thy meate: Thy mouth not be full when thou dost eat,” which translates loosely to, “Don’t hack away at your food, and swallow one mouthful before taking another.”

The foundational menu for the WDS Colonial Thanksgiving Dinner was designed by a food historian and based on centuries-old New England recipes. The 2015 bill of fare will include many of the classics the annual WDS feast is famous for: roast goose and turkey, roast chine of pork, venison pie, a pottage of cabbage, leek and onion, butternut squash, and, of course, unquestionably scrumptious creamed onions. This year also brings some interesting new, but authentic, additions, including succotash, molasses-pumpernickel bread and cucumber salad. Ale from a Connecticut brewer has been added for both the reception and dinner, as have French wines, which is what would have been largely available in the New World in the 1600s. The noon reception will be in a large, heated tent adjacent to the historic Webb Barn. As in years past, Mr. and Mrs. Silas Deane will attend the historical event dressed in period clothing.

Rudder studied historical linguistics and European history at Cornell University before acquiring a master’s degree in public humanities at Brown University. Since joining Plimoth Plantation in 2009, she has portrayed some of the colony's most iconic women, including Alice Bradford, Susanna Winslow, Mary Chilton, and Priscilla Alden. In these historical roles she has also delivered imaginary babies, been a bride “in the laudable custom of the Dutch,”  helped turn the vessel, Mayflower II, and, as a colonial foodways artisan, has salted, butchered, boiled, and roasted as the early settlers did.  While portraying Alden, Rudder regularly fields questions on Alden’s rumored “relationship” with Captain Miles Standish, but she insists there is no evidence that the matter was anything more than a lyrical notion put forth by Henry Wadsworth Longfellow, in 1858, in “The Courtship of Miles Standish.”  She adds that is a great story, people love it, and, as Longfellow was an Alden descendant, it has become something of a "family legend."

Located in the heart of Connecticut’s largest historic district, the Webb-Deane-Stevens Museum provides the quintessential New England experience - from the American Revolution to the early 20th century. Tours include the 1752 Joseph Webb House, where General George Washington met with French General Rochambeau and planned the military campaign leading to the end of the Revolutionary War, the 1770 Silas Deane House, built for America’s first diplomat to France, and the 1788 Isaac Stevens House, which depicts Connecticut life in the 18th and 19th centuries. For more information visit: www.webb-deane-stevens.org or call (860) 529-0612. Like us on Facebook: https://www.facebook.com/WDSMUSEUM.

Tickets for the WDS Colonial Thanksgiving Dinner are $100 per person, and include the reception, dinner, and an optional tour of the museum’s three historic homes following dinner. Purchase online or call (860) 529-0612.