A Hand in Time: The Art of Ben Butler

A Hand in Time: The Art of Ben Butler 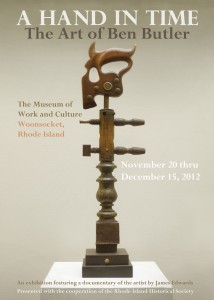 The Museum of Work & Culture proudly presents A Hand in Time: The Art of Ben Butler, an exhibition of over thirty pieces of three-dimensional work by award-winning Newport, RI sculptor Ben Butler. It will be on display from November 20 through December 15, 2012. An Artist’s Reception for the exhibit will be held Sunday, December 2nd from 4 to 7 pm. In conjunction with Butler’s sculptures, University of Massachusetts Dartmouth faculty member James Alan Edwards’ documentary film Ben Butler Sculptor: Objects from Oblivion will be screened throughout the exhibition. The five-minute trailer may be seen at YouTube here.

For the past fifteen years Ben Butler has been refining the idea of combining readymade and found objects – objects from New England’s past and recent history ranging from farm implements to nautical hardware – to create new sculptural forms. Gesture, shape, humor and spirituality are all evident in the resulting forms; his sculptures are a clean and masterful intersection of former functionality and purely abstracted form. They are the luscious tone of patina itself. “Each sculpture lives on and stands by itself,” says Ben, “but at the same time echoes out a feeling of a collective past.” In Ben Butler Sculptor: Objects From Oblivion, filmmaker James Alan Edwards has done a remarkable job of showing both the free-ranging energy of Ben’s creativity and capturing the artist’s work process from initial inspiration to the final completion of the contemporary object.

The found-object sculptures, often composed of immobilized tools, draw much from the Duchamp readymade, but also take on a haunted quality in the context of the Museum of Work & Culture. The Museum tells the story of rural French-Canadians who moved from their agrarian-based lives in Quebec to the Blackstone River Valley (MA and RI), where thousands upon thousands of immigrants became textile mill workers, powering the American Industrial Revolution of the nineteenth century. The mills of the Blackstone River Valley were a driving economic force for more than a century, though now many of those mills have been repurposed or stand vacant as textile manufacturing moved elsewhere in the United States and overseas. A Hand in Time not only explores the notion of the artist as worker, but also conjures narratives of the history of labor, as it has been articulated by different bodies and implements through time. 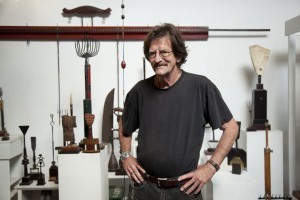 Ben Butler received an undergraduate degree in Art Education from Penn State and also studied jewelry making at Massachusetts College of Art. He co-founded the Orson Welles Film School in Cambridge Massachusetts (1969‐1971), worked as sound director for the film Godard in America (1970), and studied with Geshe Rabton, Buddhist scholar and guru to the Dali Lama in India (1971‐72).

By 1986 he had finally settled in Newport, RI (living there periodically since 1975), transitioning to working (two and three dimensionally) as full time artist. His works are in private collections and often shows at galleries in the area. Ben maintains a working studio and hideaway gallery at One Casino Terrace in Newport.