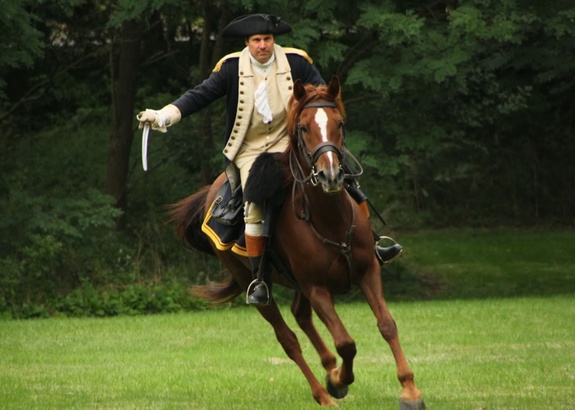 Thundering across a field at a full canter toward his “adversary,” an 18th-century horseman raises his sword and slashes through… a melon? Bolton resident David Loda will reenact this and other mock battle scenes as Lieutenant Colonel David Humphreys, aide-de-camp to General George Washington, during the sixth annual Revolutionary War Encampment at the Webb-Deane-Stevens (WDS) Museum. The event takes place Saturday, May 24, 2014, from 10 a.m. to 4 p.m., at 211 Main St., Old Wethersfield, Connecticut, following the Wethersfield Memorial Day parade. Admission to the encampment is free; regular admission rates will be charged for the optional 60-minute tour of the museum.

As the newest feature at the encampment, Loda—a retired Navy pilot from the 21st-century —will demonstrate “horsemanship with arms,” skills from the 18th-century, including both sword and pistol. Loda creates a dashing figure in full Continental uniform and tri-corn hat and astride his gleaming Morgan horse, Huckleberry. When he portrays Humphreys—barreling across a battlefield toward a “soldier” portrayed by a melon perched atop a post— visitors will easily grasp the likely level of discomfort their forbears felt when faced with a charging, sword-wielding horseman.

The WDS Revolutionary War Encampment also includes members of the 54th Regiment of Foot, a dashing band of British redcoats whose safety is uncertain once they commence a “surprise” attack on the Continental soldiers at 1 p.m. An bake sale will feature the wildly popular fare created by Liberty Tea, bakers who create delicious homemade treats from historic recipes, using all-natural ingredients.

David Humphreys served as principal of the Wethersfield public school following his graduation from Yale University in 1771. During the American Revolution, he served as aide-de-camp to generals Putnam, Greene, and finally from 1780 to the end of the war, George Washington. Loda’s portrayal of Humphreys at the Webb-Deane-Stevens Museum encampment is particularly significant as the Joseph Webb House is where General Washington and French Lieutenant General Rochambeau planned the joint military campaign that led to the victory at Yorktown, Virginia, and the end of the American Revolutionary War. Humphreys had the honor of delivering the surrendered British flags from the Battle of Yorktown to the Continental Congress.

The WDS Revolutionary War Encampment offers visitors the chance to interact closely with members of the Fifth Connecticut Regiment in full Colonial costume, with entertaining demonstrations of marching and musket firing, 18th-century open-fire cookery, and enchanting harp and dulcimer music. Shortly after the regiment partakes of its midday meal, children in attendance will be invited to learn to march and perform drills with wooden “muskets.” The British are expected to attack at 1 p.m. A fascinating display and discussion of the medical and surgical techniques used in the late 1700s, and an exhibit of period clothing and fashions, are also be featured. The encampment is underwritten, in part, by a grant from the Society of the Cincinnati in the State of Connecticut.

About the Webb-Deane-Stevens Museum
Located in the heart of Connecticut’s largest historic district, the Webb-Deane-Stevens Museum consists of three authentically restored 18th-century homes and provides the quintessential New England experience - from the American Revolution to the early 20th century. Tours include the 1752 Joseph Webb House, where General George Washington met with French General Rochambeau, and planned the military campaign leading to the end of the Revolutionary War, the 1770 Silas Deane House, built for America’s first diplomat to France, and the 1788 Isaac Stevens House - depicting life in the 18th and 19th centuries through original family objects and a fascinating children’s exhibit. For rates and hours visit www.webb-deane-stevens.org  or call (860) 529-0612, ext. 12.

From Hartford and Points North: Take Interstate 91 south to Exit 26 (Old Wethersfield). It is four miles south of the intersection of Interstates 84 and 91 in downtown Hartford. Follow the prominent brown signs for the Webb and Deane Houses. When you arrive at the intersection in the center of Old Wethersfield, take a left on Main Street. The museum is one block on the right side of the street.

From New Haven and Points South: Take Interstate 91 North to Exit 26 and follow the signs to the houses in the center of Old Wethersfield.

From the West: Take Interstate 84 east past Waterbury to 691 east. From the left lane, exit to Interstate 91 north.

The Museum may also be reached from the Silas Deane Highway (Route 99). Both Church Street and Wells Road connect with Main Street.

Parking: Car parking is available at no charge on Main Street in front of the museum or in the parking lot behind the Keeney Memorial Center directly across the street. School or tour buses may park on the museum grounds in back of the Barn or at the Keeney Center.