The first History Camp was held in March 2014 in Cambridge.  That was the first time anyone had ever adapted the unconference or "barcamp" model to history.  The event filled up, there was a strong positive response at the event, and an anonymous survey after the event had very positive results.

A year later we held another History Camp, this time in Boston, and it got a a very favorable response, too.

From the outset, the hope has been that individuals in other regions would be interested in putting on a History Camp in their city or state.  And this fall that will happen.  The first History Camp outside of New England will be History Camp Iowa on November 14 in Des Moines.

The History Camp Iowa effort is being led by Danny Akright.  He's in the process of assembling his team, and earlier today we met in at the Iowa History Museum to kick off the process.  (See the photo below.)

It will be very interesting to see History Camp come to life in another region, and especially in this building, in this city, and at that time.  The space, rooms, and layout of the Iowa State History Museum make it perfect for the event, it's located just a few blocks from the beautiful Iowa state capitol building, and with the Iowa presidential caucuses just weeks away at that point, the state will be overrun with candidates and national news crews. 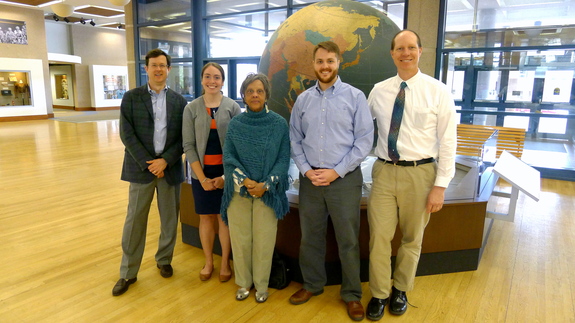 From the left: Lee Wright, founder of History Camp and The History List; Hope Grebner, an archivist at Drake University who is working on the Harkin Archives; Elaine Estes, former executive director of the Des Moines Public Library system, and the person who was instrumental in preserving the original downtown public library building, which is now the headquarters of the World Food Prize; Danny Akright, who works at Drake in communications and who has an undergraduate degree from Drake in history and has worked at history museums in Kansas City and London; and, Leo Landis, who has worked at several museums and living history sites, and who is currently the curator at the Iowa History Museum.