The innovation imperative and the pace of change, from Facebook's "Little Red Book"

Facebook's "Little Red Book"—really an unfortunate title for anyone aware of history—helps reinforce the company's philosophy, including on innovation and the pace of change.  Two excerpts below, and more here. 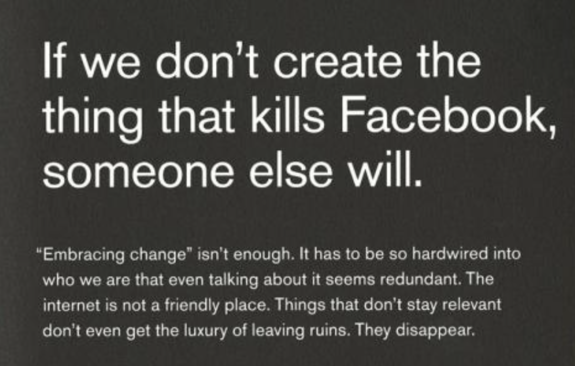 Running a historical society, history museum, historic house museum, or historic site is much different than providing an app or social service or other online product. And yes, there are a billion differences between Facebook the company and what we do as volunteers at or employees of history organizations, but there are some good ideas here.

Granted, some will react reflexively and negatively, but perhaps that means helping people move out of their comfort zone, or at least getting them to think about change and innovation.

Not suggesting change for the sake of change, or that the new thing is better than the old thing—far from it—but rather that we need to be thinking about why we’re doing what we’re doing and the possibility, and ability, to do something new.

Putting historic objects and exhibits in places where people already are

Yesterday in downtown Boston I saw this sign on a busy sidewalk: 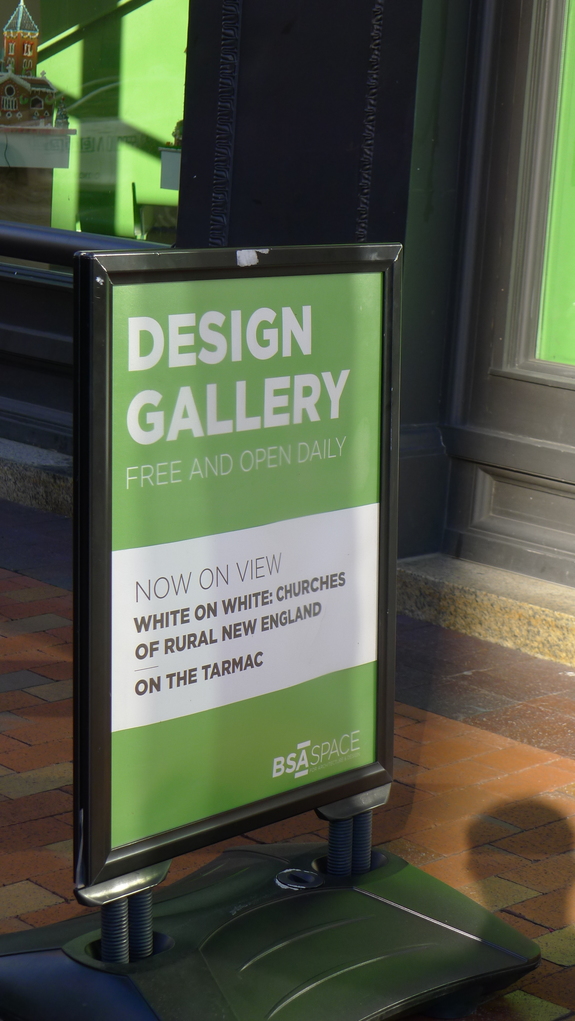 Inside BSA Space, owned by the Boston Society of Architects, was "White on White: Churches of Rural New England," a display of photographs of churches throughout rural New England along with several panels explaining the history of the preservation movement in Boston and the excellent work done by Historic New England.

While I don't know how many people are drawn into the upstairs gallery to see this free exhibition, it's another example of putting history, and historic objects and exhibits, in places where people already are, as opposed to always relying people to come to your site or museum.

I earlier wrote about Wells Fargo and their use of their heritage, including their famed stage coaches and the 10 small museums they have across the country, as examples of getting historic objects and displays out in places where more people will encounter them.  While their motivation is somewhat different, the result is the same: More people, including those who may not go to history museums or historic sites, have the opportunity to learn about history.

To help raise awareness of the many great gifts for history lovers available from historic sites, history museums, historical societies, and artisans across the country, we are going creating The History Gift List for 2015 (TheHistoryList.com/gifts) and promote 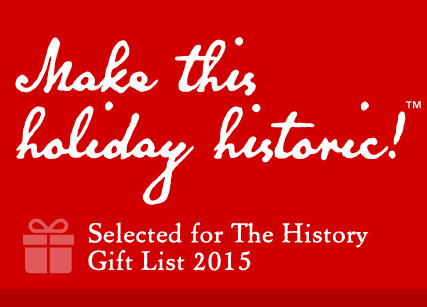 it on social media.

We're looking for unique items.  For an artisan, things that are made by hand.  For an author, signed or inscribed editions. For a gift shop at a museum, historic site, or historical society, an item that is only available there.

To have yours considered, send an e-mail message with a link to the item.  Make sure the link includes a photo and description, as well as the ability to buy it online.  Also include the “order by” date to ensure Christmas delivery anywhere in the country. If you have a very limited quantity, note that, too. Send this information in and put "The History Gift List for 2015" in the subject line.  Note that we'll link to your site. You keep all the revenue; we're just trying to help get the word out.

As we get close to the Christmas, we’ll promote things that can be downloaded or ordered overnight, so include those details if they are apply to your item.

And what's the best really-last-minute gift?  A gift membership. 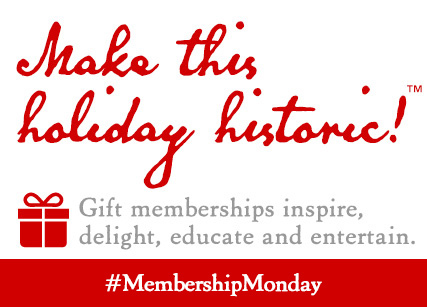 Let's start a new tradition: #MembershipMonday on the Monday of the week of Christmas.  We'll make it the day to promote giving gift memberships and to market and promote them creatively.

This Resources post has several ideas for marketing gift memberships, including examples of the way several different types of history organizations market their gift memberships.

We've added a special #MembershipMonday marketing bundle you can download.  It includes JPGs, such as the one on the right, that you can use in any of your materials, as well as PDFs you can print out and use as tabletop signs. 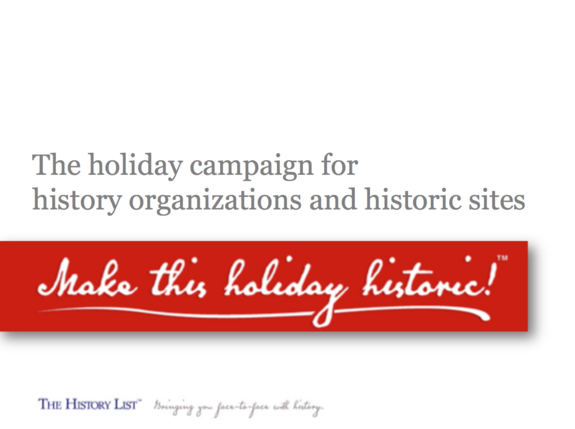 More information on the overall campaign is on the "Make this holiday historic!" campaign page, including a link to download additional marketing material, as well as market research.

History 2.0: Tools and platforms for increasing access to historic archives

The announcement of a new initiative, Open Lab Workshop, focused on GLAM (galleries, libraries, museums, and archives) that is being led by Michael Edson at the National Endowment for the Humanities, who showed such leadership on many of these issues in his previous post at the Smithsonian, got me thinking about this presentation, which I gave at an O'Reilly Ignite series at the MIT Media Lab three and a half years ago.

Unfortunately, my observations in this talk are just as relevant today as they were in the spring of 2012.

The organization is hosting an unconference and Ignite talks on December 1 in Washington, followed by an invitation-only meeting that is no longer accepting participants.

It will be interesting to see what comes out of their effort.

There are an impressive list of organizations participating in the December 1 open meeting:

This is the list on the site today.  It doesn't appear that the National Council on Public History, the American Association for State and Local History, and the Association for Living History, Farm and Agricultural Museums are involved, or that individuals from those organizations are attending.

According to the wiki, these are the organizations that have taken the lead in this effort:

The Openlab Workshop is funded by the National Endowment for the Humanities Office of Digital Humanities and Division of Public Programs in a cooperative agreement with The Council on Library and Information Resources. 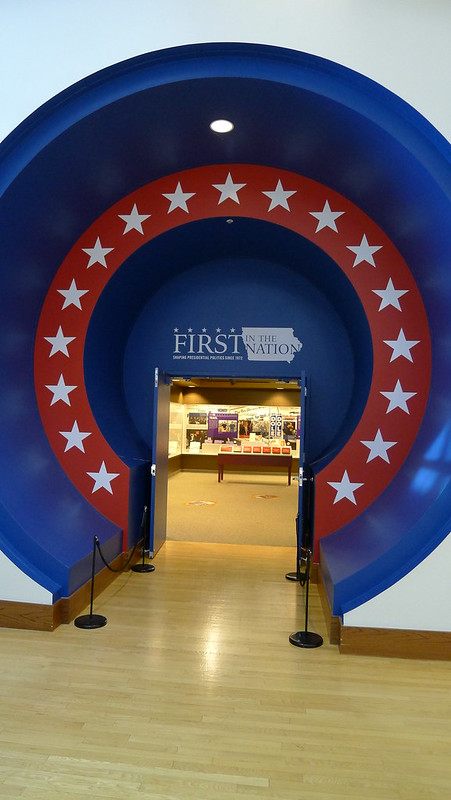 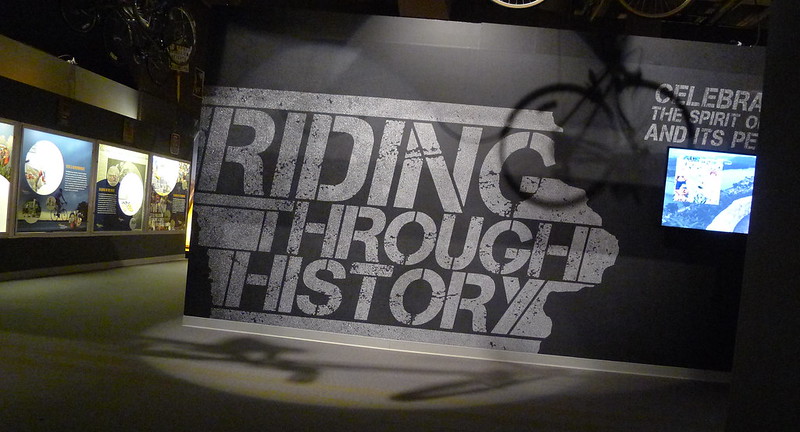 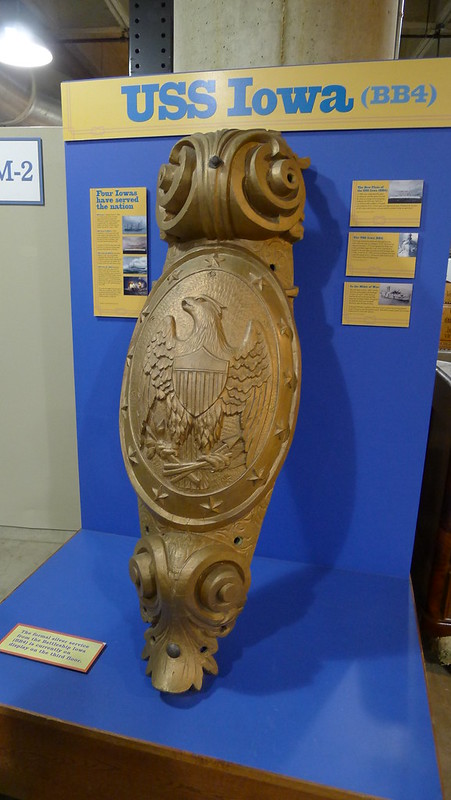