Subscribe to this newsletter or browse resources for history organizations.

We're compiling a list covering all eras and types, from military to farming and everything in between.  Both the great large annual reenactments and the ones that are going to be exceptional in 2016 because of a major anniversary.

Please add your recommendations below, including the size, location, and what's notable about 2016.  And please ask others, especially those who are members of reeanctor groups, to nominate reenactments for inclusion.

These are the 14 organizations closely related to the presentation of history that were among the 262 grantees announced in the six cities selected by the foundation.

From the September 15 release:

"Through this two-year initiative, Bloomberg Philanthropies provides unrestricted grants to 262 organizations around the country to help strengthen their operational and programming efforts and offers arts management training in fundraising, audience development and board member engagement. All selected nonprofit cultural organizations are locally or internationally recognized groups that have been in existence for at least two years."

There were no categories listed, so these are my selections.  If you think that one of these is in error, or if one or more are missing, please let me know and I'll revise the list.

I met with Jody Blankenship, Executive Director of the Connecticut Historical Society, and Ilene Frank, Chief Curator, on September 3 to update them on The History List, including the new weekly statewide history events mailing, discuss other projects that we might tackle together, and get a tour of their museum.  Jody was named executive director a little less than a year earlier, recruited from a post at the Kentucky Historical Society, and Ilene Frank was recruited in in May of this year from the Rensselaer County Historical Society in Troy, N.Y., where she had been the executive director.

I first met Jody on a visit to the Kentucky Historical Society in August 2012.  I wasn't surprised to hear last fall that he'd been chosen for the top job at the Connecticut Historical Society, or that lots of new things are happening under his leadership.

These six ideas may be of particular interest since almost any organization can apply them:

Photos of these are included below.

If you would like to meet at your state or local historic site, please let me know and I'll schedule a visit when I'm in the area.

A creative poster for the upcoming weekend at Old Sturbridge Village.  The poster is content-rich— it includes many of our recommendations for how to write an event description that draws the right crowd—and yet it's not cluttered or overwhelming.  (A larger version of the poster, without any annotation, is here.) 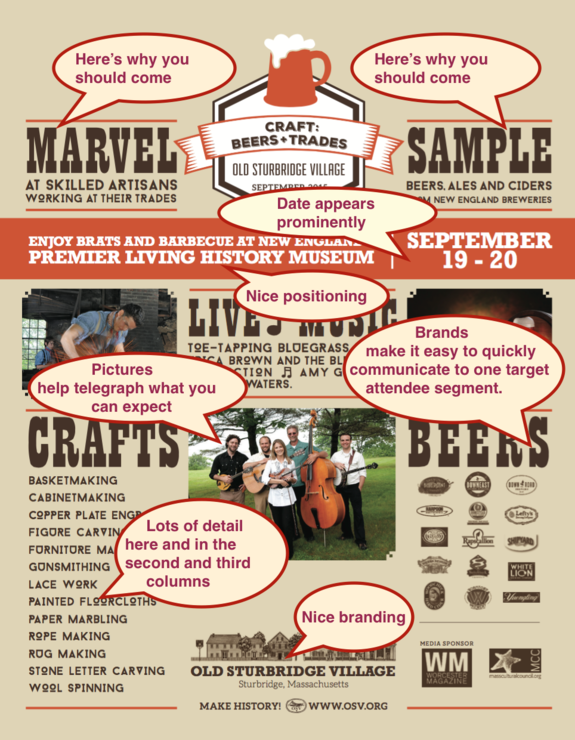