The Vermont History Expo: 150+ history organizations and thousands of guests

Updated: August 10, 2012: A shorter version of this appears as a case study in the new Resources for organizations section.

The Vermont History Expo 2012 took place this last weekend in Tunbridge, Vermont, bringing together more than 150 historical societies and related organizations for a two-day event expected to draw 4,000 - 6,000 attendees.

Because of the interest shown in this event by several people in other states, I took pictures of every aspect of the event, including the print materials and signs.  In the 400+ photos below you'll also see pictures of nearly every booth and display.  (Tip: To view a larger image, click on "Link" on the right below each photo.) 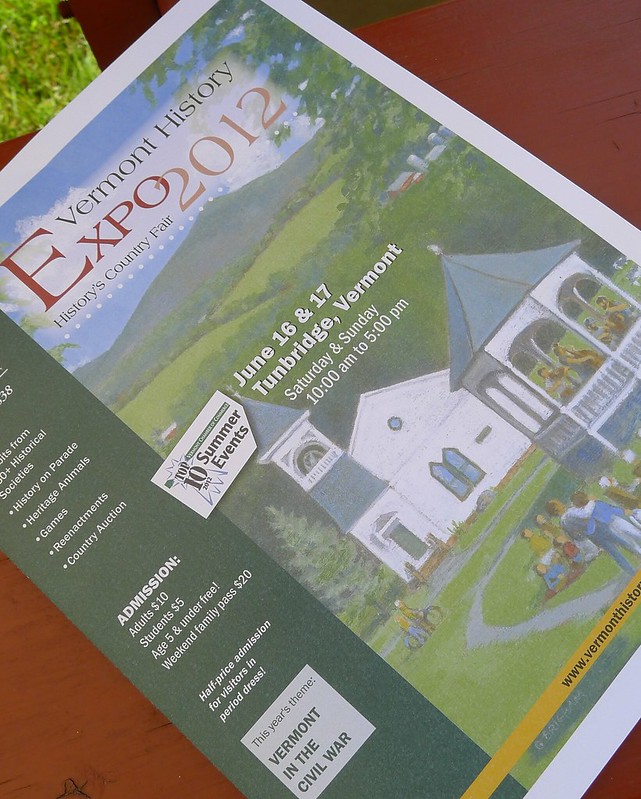 The history behind the Vermont History Expo

The Expo, which now takes place every two years, began in the year 2000 and is organized today by staff and a small group of volunteers, with the financial support of several sponsors.  During the two days I learned about the history of the Expo from Addie Minott, a long-time volunteer with her local historical society who, as a board member of the Vermont Historical Society, was one of the driving forces behind the first Expo, and from Tess Taylor, Director of Education and Public Programming at the Vermont Historical Society, and Mark Hudson, Executive Director of the Society.

The idea for the Expo came from an initiative by three counties in 1999 who all agreed to open on the same Saturday.  The next year the Expo was born as a state-wide event with 85 of the state's then 90 historical societies participating.   The Expo continued yearly until 2008, when it switched to every other year.  An annual theme was added in 2005.  These have included "Women in Vermont History," "Travel and Transportation," "Back to the Land," "Industry and Innovation," and this year's theme, "Vermont in the Civil War."

One of the important results from that first Expo to the present day is that more communities have started or revitalized their local historical societies, such that today there are 197 societies in Vermont.

Connecting with organizations across Vermont

Mark Hudson expressed his interest in letting the state society's member organizations know about The History List as a no cost tool for publicizing their organizations, sites, and events.  (Dennis Fiori, President of the Massachusetts Historical Society, and Carol Knauff, Assistant Director of Development for Communications at the Society, came on board early on and have been very supportive, including participating in the beta and providing helpful feedback.)

Also during the Expo, conversations with . . .

Similar events in other states

Several people replied to a post in a LinkedIn group asking if anyone knew of other states or regions with something similar:

If your are connected to any of these as an organizer, volunteer, or participant, or if you know of another similiar event, please add it to The History List and add a comment below so that others learn about it.