Updated April 17, 2016: They've now banned ladders. Thanks to John Bell for the update. 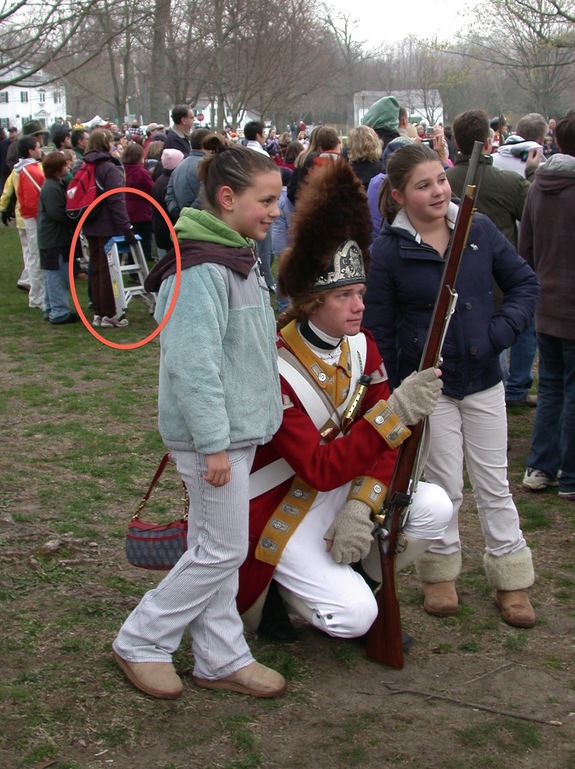 It was on this date in 1775 that that alarm was sounded in towns west of Boston.  And tomorrow, historians from around the country will gather in Milwaukee for the annual Organization of American Historians / National Council on Public History conference.  (We don't know whether the residents of Milwaukee have also been warned, but we hope to receive a warmer welcome than did the Regulars who marched to Lexington and on to Concord those many years ago.)

In fact, the ride of Revere and Dawes, and the reenactments that take place every year were two things that inspired the creation of The History List.

You can spot one notable item in this photo from the 2009 reenactment: A ladder.  Who knew you needed to bring a ladder to see over the heads of those who arrived before dawn to get a place on the perimeter of Lexington Green?  Answer: Anyone who had attended before.  One of the goals of The History List is not just to help people find interesting history-related events, exhibits, and sites, but to also provide tips on how to get the most out of them.

If you're attending the conference, I hope you join me for this "dine around" Friday night: "Putting the 'Public' in 'Public History:' Strategies and ideas for getting more people into historical museums, sites, and landmarks."

It's for anyone involved with an historic site or museum, or with a history-related event, this is an opportunity to share your ideas and learn from others about how you attract a crowd: What worked, what didn't, and what you're considering doing in the future.  Based on the interests of the group, we may consider the role of social media, free versus paid media, working jointly with other organizations, and branding or rebranding your event.

And we're headed a few blocks from the hotel to the King & I Thai Restaurant at 830 North Old World 3rd Street.  They have a large selection of Thai dishes, including several vegetarian choices, and the full menu is online.

We've arranged for separate checks, and the reviewers on Yelp give it 4 out of 5 stars.  You must sign up in advance; I'm told that space is limited.

Looking forward to meeting you in Milwaukee.

If you want to read about a couple of event or site promotion ideas in advance, there are two here: One promoted a new cable channel and could be adapted to our history-related events.  The other is a marketing campaign involving daily video created by The Freedom Trail Foundation.  (Video of both in the posts.)