Thank you, David Rubenstein—to your parents, too

Updated November 27, 2013: David Rubenstein bought a copy of the Bay Psalm Book, printed in 1640 and believed to be the first book printed in what is now the United States, after the Old South Church voted to sell one of the two copies they own.  The sale, for around $14 million, set a record for a printed book.  He has indicated that he "plans to lend it to libraries around the country."

Updated February 24, 2013: According to news reports, David Rubenstein is again making a large donation connected with President Washington, this time donating $10 million toward the new National Library for the Study of George Washington, which is scheduled to open September 27, 2013.  This donation puts the group over their fundraising goal for the project and was announced on what would have been Washington's 281st birthday.

The Mount Vernon Ladies’ Association, which owns and operates the site, does not accept federal funding.  The campaign to construct the Library was led by a $38 million contribution by the Donald W. Reynolds Foundation.

The day before the press conference he said, "I come from very modest circumstances, and I'm very fortunate to have achieved wealth beyond what I ever expected."  The son of a postal worker, he underscored again the impact that coming face to face with history can have: “I visited when I was a little boy.  I was probably 8 or 9. I grew up in Baltimore. My parents took me to it."

Congress allocated $7.5 million in December on the condition that private donations would match that amount. The combined $15 million in public and private funds is expected to cover the cost of repairing damage directly caused by the quake, said National Park Service spokeswoman Carol Johnson. Repairing water damage will cost more, as would a seismic study or reinforcements to strengthen the structure against future earthquakes, she said. 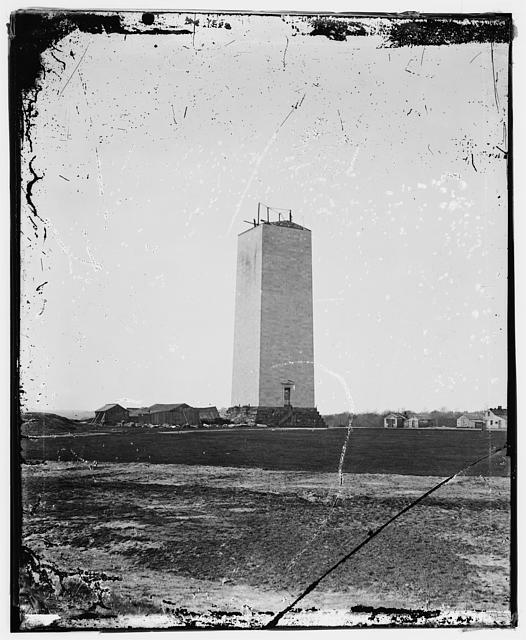 The monument was built with private $1 donations eventually totaling over $1 million, Rubenstein said. Construction began in 1848, but funds ran out during the Civil War when the monument was left as an embarrassing stump for years. It was finally completed in 1884 and was the world’s tallest man-made structure until it was eclipsed by the Eiffel Tower. It remains the tallest structure in Washington.

While we're all generally familiar with this part of the history of the monument, the fact that stones with historical or social significance were donated, was new.  As described in the Wikipedia entry:

Excavation for the foundation of the Monument began in early 1848.  The cornerstone was laid as part of an elaborate Fourth of July ceremony hosted by the Freemasons, a worldwide fraternal organization to which Washington belonged. . . .

Construction continued until 1854, when donations ran out.  [Matthew Brady's photograph (right) of the partially-completed monument is from the Library of Congress.]  The next year, Congress voted to appropriate $200,000 to continue the work, but rescinded before the money could be spent. This reversal came because of a new policy the society had adopted in 1849. It had agreed, after a request from some Alabamians, to encourage all states and territories to donate commemorative stones that could be fitted into the interior walls.  Members of the society believed this practice would make citizens feel they had a part in building the monument, and it would cut costs by limiting the amount of stone that had to be bought. Blocks of Maryland marble, granite and sandstone steadily appeared at the site.  American Indian tribes, professional organizations, societies, businesses and foreign nations donated stones that were 4 feet by 2 feet by 12–18 inches . . . One stone was donated by the Ryukyu Kingdom and brought back by Commodore Matthew C. Perry, but never arrived in Washington (it was replaced in 1989). . . . [O]ne from the Templars of Honor and Temperance stated "We will not buy, sell, or use as a beverage, any spiritous or malt liquors, Wine, Cider, or any other Alcoholic Liquor.". . . In the early 1850s, Pope Pius IX contributed a block of marble. In March 1854, members of the anti-Catholic, nativist American Party — better known as the "Know-Nothings"—stole the Pope's stone as a protest and supposedly threw it into the Potomac (it was replaced in 1982).  Then, in order to make sure the monument fit the definition of "American" at that time, the Know-Nothings conducted an illegal election so they could take over the entire society.  Congress immediately rescinded its $200,000 contribution.

When it finally was completed, the dedication, on February 21, 1885, was a grand affair.  Here is the invitation and the full text of the speeches delivered: