My comment on "Edutainment and the Boston Tea Party"

Updated December 11, 2013: The long post from the CEO, who also, apparently, designed the exhibit, defending his museum is worth reading, as are several of the other comments.

"This is an important topic, and there is an interesting contrast between this experience and the annual reenactment, which took place on December 16 at the Old South Meeting House and continued on to the docks to watch the boarding of one of the replica ships and the dumping of the tea (pictured). (Several additional photos of the event.) 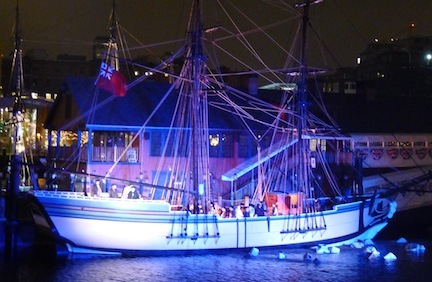 While the Meeting House wasn’t as full as it’s reported to have been when the actual meeting took place, it was full by modern standards and there was an electric feeling, as if we were about to witness something special. The reenactors were great and struck the perfect balance between their portrayal and, say, helping a youngster lower the mic so he could address the gathering. I was surprised to see so many kids step up and speak to what was probably the largest group they’d ever addressed.

Of course the Boston Tea Party attraction can’t afford to stage a huge meeting several times a day, but the larger point isn’t one about the use of technology as a substitute, per se. Instead, it’s whether we should focus on delivering an authentic experience that tells the story in a straightforward and honest way, or whether we should feel that we have to “sex it up.” In order to attract a generation that is growing up on iPhones and iPads, do we need to introduce these new technologies in order to capture and hold their interest when they step into our museum or onto our site?

I would argue that the reality is just the opposite. Regardless of the age of the guest, we should presume that they are there because they want to be–not always true for all kids in school groups, I realize–and that they deserve to be treated as intelligent individuals. They may not know much about the history of what they’re looking at or of the site where they’re standing, but they’re standing in front of you because they want to be there. If they wanted to stare at their iPhone or iPad, they would have stayed in the car. A well-designed exhibit or a capable engaging docent should not be replaced with an investment in flash. It’s authenticity that they’re after, and that’s in the documents and the artifacts, the place and the narrative, not the technology and certainly not in a ham-handed attempt to make it relevant and engaging by dumbing down the story and turning up the volume.

A final note: If organizations are going to invest in technology, they should focus on the people who aren’t there but who one day may be. This means immersive online experiences, live streaming events, and providing access to documents and photos of the collection. The viewers and users of those online resources are all people who are going to plan a trip or encourage others. The preview and the opportunity to engage online only makes it more interesting. Let’s banish the statement, “If we put it online, no one will want to come.” Do we believe that the White House, the pyramids, Wrigley Filed, or Disney World get fewer visitors because tens of thousands of photos and descriptions are online?"