The finals of the 2014 Massachusetts History Day were held today at Stoneham High School in Stoneham, Massachusetts. 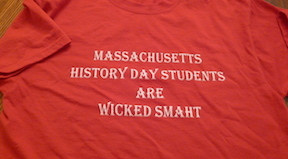 This year's theme was "Rights and Responsibilities in History." Junior high and high school students competed individually and in teams in these categories: Exhibit, papers, performance, documentary, and website.  (Examples of national winners in prior years in each of these categories are listed on the National History Day site.)

Roughly 350 students from 50 schools were competing, supported by more than 80 teachers.  Pictures from several of the exhibits and the first several awards at the ceremony are below.

The exhibits were the only category of the finals I saw.  They were well done, with considerable time and effort put into researching the topic and creating the exhibit.

Note that the Revolutionary War, the Civil War, and many other topics were covered in entries in other categories.

Get the flash player here: http://www.adobe.com/flashplayer

The local historical society on whose board I serve has struggled to engage high schools students despite overhauling our annual scholarship.  We raised the award to $1,000, changed the initial requirement from a finished project to submitting a proposal, and broadened the implementation to include various web and social media tools.  (The 2014 scholarship is described in detail here.)  I don't know whether or not students  in our local high school are encouraged to participate in the state-level National History Day contest, but judging from the exhibits I saw and the auditorium full of students and parents, it's clear that some schools across the state are using History Day to great effect.

If there are other national programs aimed at fostering interest in history among junior high and high school students, please let us know.