John Bell on the upcoming History Camp, March 8 in Cambridge

Updated: March 9, 2014: John wrote a short post about yesterday's History Camp, where he was a speaker and a panelist.

Updated: April 2, 2014: A video of one of John's talks at History Camp, "The Boston Bankruptcy That Led to the American Revolution," is now online.

John Bell, of Boston 1775 fame, was one of the inspirations for History Camp, which takes place on March 8 in Cambridge, Massachusetts.

John is a well known scholar and writer.  In addition to being the author of the Boston 1775 blog and an in-depth (669-page) historic resource study of the Longfellow House-George Washington's Headquarters National Historic Site for the National Park Service, John is a contributor to the highly-regarded Revolutionary War-era site All Things Liberty, the Journal of the American Revolution, as well as other books, and is a frequent presenter, panelist, and interviewer (shown here in December with author Nathaniel Philbrick discussing Philbrick's new book, Bunker Hill). 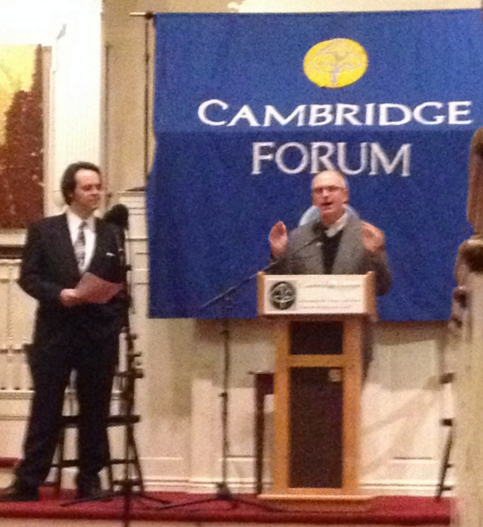 As John mentioned in his blog post published Saturday and reproduced below, I raised the idea for History Camp on our walk to the subway following a rousingl "RevWar Schmoozer," an informal gathering of RevWar history buffs over beer at an establishment near Faneuil Hall organized by Todd Andrlik, founder and editor of All Things Liberty and other publications (including this one and this one), John was interested in learning more, so I sent him links to information about the unconference format.

Authors Sam Forman and Liz Covart were interested in participating, and local entrepreneurs Laura Wallendal and Adam Hasler said they were interested in helping organize it.  Adriene Katz of the Shelburne Museum, Colleen Janz of the Susan B. Anthony Birthplace Museum, were very encouraging.  (As I recall, Colleen's reaction went something like this when I approached her at the NEMA conference in Newport: "John Bell's going to be there?!  If he's going to be there, I'm going!")

John, Sam, Liz, and Colleen are all going to present; Laura, Adam, and Adriene may; but Todd, who lives near Chicago, is already scheduled to travel to several other history events throughout the year and is unlikely to be able to attend.

Registration opened last weekend.  The size of the facility, generously donated by IBM and the folks at IBM's Cambridge Innovation Lab, will limit the number who can attend, so if you'd like to join us on March 8, register now.  And please consider speaking.  As John notes below, as an unconference, History Camp will very much be what we make it.  More information, including the current list of presentations, is at the History Camp wiki.

On Saturday, 8 March, Lee Wright of The History List is organizing a “History Camp” at the I.B.M. Innovation Center in Cambridge. This event is designed to be an “unconference,” or self-organizing, non-hierarchical conference, for anyone in greater Boston interested in history.

The program will depend on who signs up to speak in the next few weeks. The presentations are supposed to be short and lively. The only requirement is that they not be just a sales pitch for a book, tour, class, or other product. I imagine those presentations falling into two categories:
neat stories and findings about the past and practical tips about researching, writing, and teaching history.

I proposed two topics to Lee, one in each of those categories: “The Boston Bankruptcy That Led to the American Revolution” and “Google Books Changed My Life, and You Can, Too!” In addition, Lee drafted me for a tentative panel on “Becoming a Published Author” because I was once an acquiring editor for a book publisher.

Lee had the idea for History Camp after last fall’s RevWar Schmoozer. That informal social event brought together people from our city’s historic sites, reenacting organizations, libraries, museums, tour companies, colleges, and other institutions. It would be great to an even broader turnout at this event, which isn’t confined to the Revolutionary period. Given its setting, this History Camp might be an especially good place to talk about using new technology to improve the study or presentation of history.

As a self-organizing conference, History Camp will take shape over the next few weeks based on the interests of the folks who volunteer their time or ideas. So check out the website, think about the stories you might have to tell or would like to hear, and start signing up!